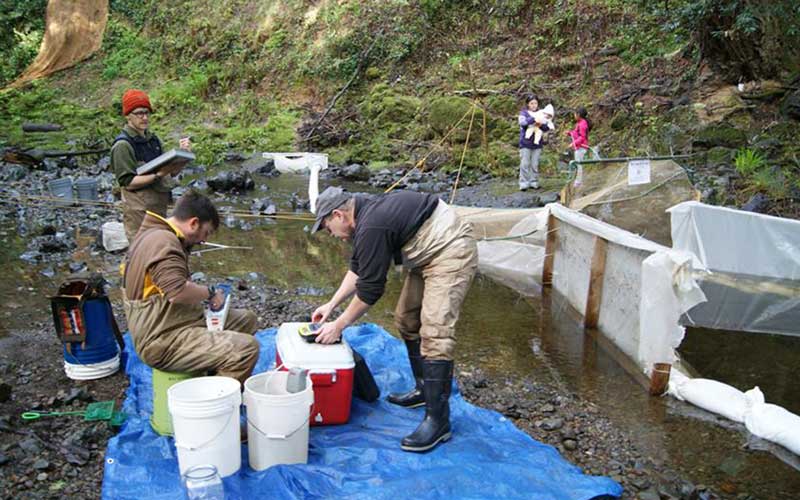 Dressed in boots, hats, waders and many layers of clothes, volunteers of all ages and abilities waded into the chilly waters of San Geronimo Creek in Lagunitas, Calif. every morning for two months to help SPAWN biologists count endangered juvenile coho salmon. The particular fish SPAWN is interested in counting are juvenile smolts (A.K.A. “teenage” fish). These smolts were born in our creeks over a year ago, and had survived floods, predators, and everything in between. Now, they were finally ready to migrate downstream to the ocean to begin their adult lives, and SPAWN had to be ready to monitor their journey.

To count the smolts, SPAWN set a small v-shaped net in the creek that encouraged the fish to swim into a box located in a deep pool. The fish would find refuge in the cool, deep waters of the pool until the following morning when trained staff and volunteers gently scooped them out and weighed, measured, and assessed their health before sending them on their way.

The volunteers that SPAWN worked with this year were absolutely invaluable in helping us collect this data. SPAWN would not have to the able to fulfill the monitoring efforts without their strong commitment to the program. Some volunteers assisted weekly, while others assisted daily.

Thank you again to all the volunteer citizen scientists who have contributed to the recovery of these endangered coho!