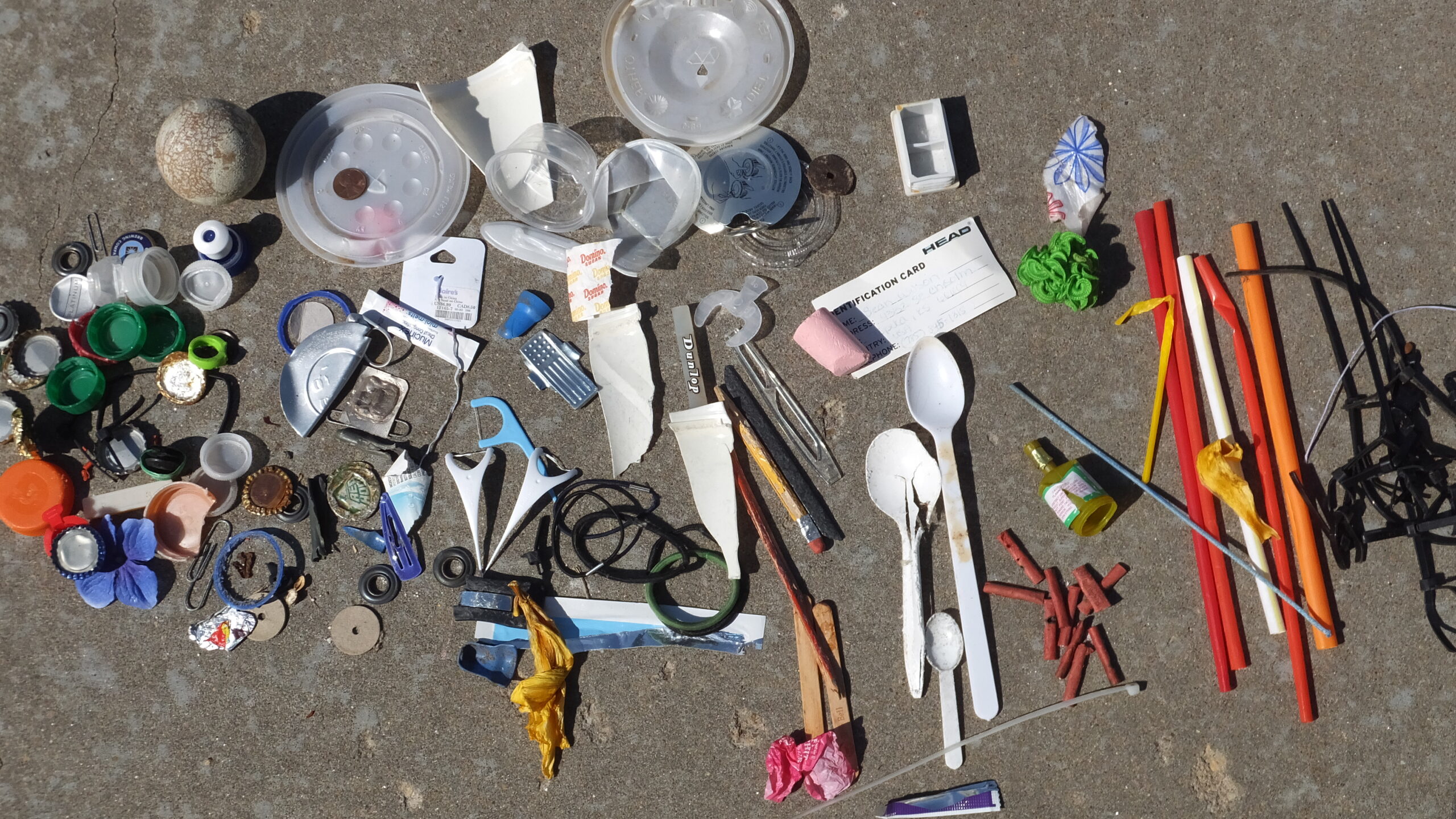 Trash Flows to the Ocean

Editor’s note: This is a follow up article to a previous blog, Kansas is a Coastal State.

We know that the effluent from 31 states flows into the Mississippi River and into the Gulf of Mexico.  We know that all manner of chemicals from farm application to industrial production, that sewage – some treated and some not treated – flow into the Mississippi River.  We also need to know that we have a responsibility for some of the trash that flows to the Gulf and ends up in the digestive systems of marine mammals in the Gulf, and beyond.  We need to know that we are directly responsible for the trash we throw on the ground, which inevitably ends up in the Gulf and likely in marine mammals. Some of those species in the Gulf are listed as endangered and others, the Kemp’s ridley sea turtle,  listed as critically endangered.  They’re in enough trouble without having to deal with our negligence.

A video that went viral some months ago illustrates what can happen to a turtle when it mistakes a straw for food.  Texas A&M graduate students removed the straw from the nose of a turtle in the Gulf.  The straw was obvious.  Other plastic material is not until the animal dies.   Watch the video by clicking here.

Pictured are just some of the items I collected in the period of one month in small sections of a two square mile area in Topeka, Kansas. (Exception: an unspent bullet I found outside a down town restaurant is not in the photo). Topeka is situated on the Kansas River, which connects to the Missouri River, which flows into the Mississippi, which flows into the Gulf.  That is the route these items would have taken had they not been removed.  One area of collection is the parking lot  from my parked car to and from a large grocery store.  The second route is a walking path on a nearby lake.   The third area is a small concrete space surrounding tennis courts.  I didn’t search for these items rather, they were in front of my feet. If I hadn’t picked them up I would have stepped on them.

The grocery store has two large trash bins outside the entrances; there are periodic waste cans placed along the walking trail at the lake, and the tennis courts have trash receptacles inside and outside the court fences.  In other words, there is absolutely no excuse whatsoever for the items in the photo to have been strewn on the ground. 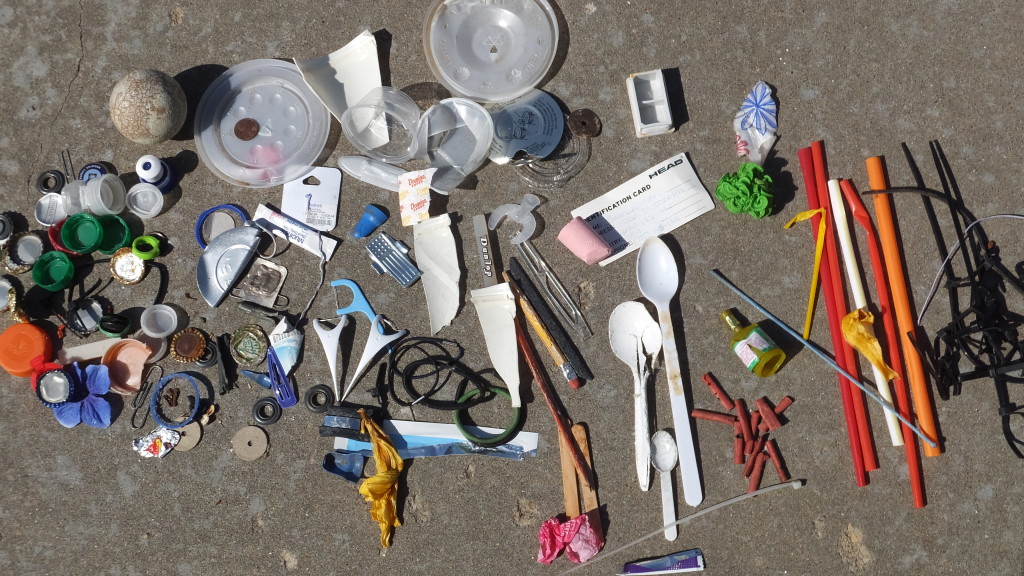 Bottle caps, both plastic and metal, seem to be the most prolific deposits that did not reach the trash receptacles.  But dental floss picks! What is this highly unsanitary habit about?  People practicing dental hygiene in public, in parking lots and then tossing the pick.  This certainly indicates a deep cultural deficiency. Then there are left-over fire works, hopefully spent. And that category of waste was massive on the morning of the 5th of July, headed for the Kansas River and eventually the Gulf.  The grocery store regularly gives samples accompanied by plastic spoons.  Is it too much to ask that the customers deposit the spoons in the convenient,  large trash cans outside the store on their way out?  And the rings that hold long locks of hair – another regular feature of parking lot trash.  Why are they on the ground?  I did not collect plastic bottles, aluminum cans, plastic bags or cigarette butts, although they were on the ground as well.  Although balloons are not  part of surface litter, the message that balloons regularly float to the sea and become a part of the deadly diet of marine life needs to be included in the education message.

Much has been published about the ocean plastic crisis.  Are people in my town especially unaware of the impact they have on marine life, on the ocean?   Or do they not care?  Being in the middle of a land mass, hundreds of miles from the ocean, I’m wondering if the first problem is that people are unaware of the ocean.  Out of sight; out of mind.  We don’t see it, therefore it doesn’t exist. Perhaps this is where the problem starts not only here but also in the other 28 land locked states. Nevertheless, ignorance does not excuse personal responsibility.  To begin with, the Earth is not a trash can.

Think of the mass of trash that flows to the Gulf.  My collection is from three tiny sections of a small spot in a middle sized city. I don’t believe citizens of Topeka are less or more intelligent than those in the 31 other states.  I believe plastics and other trash in and headed to the ocean is a national problem, and a massive problem for the creatures of the sea.

Is tossing trash also a cultural deficiency?  As a nation, are we dumbing down culturally as well as intellectually?  I recently had the good fortune to be in Cuba and spent five days on the western coast near a beach.  I did not see one empty plastic bottle, nor one cigar butt, nor one bottle cap or piece of trash anywhere.  Nor did I see any trash on the streets of Havana.   Perhaps one reason is because, for example,  although water is available for $1, salaries of $18 or $30 or $50 a month are too meager to afford bottled water.  Which might cause one to think that we, by comparison, are rich and spoiled and thoughtless.

How do we cure ignorance, so that we can keep trash out of the ocean and out of the digestive systems of marine life?   I think first we have to care.  When we understand the problem and have concern for life other than our own, we can help.  Following Dr. Earle’s advice, we can educate by informing friends, work colleagues and social groups that this problem exists. We can ask businesses to post signs, especially those businesses that sell goods accompanied by plastic waste.  We can ask cities to paint notices on storm drains.  We can ask park departments to post notices about what happens to the objects we toss on the ground.  We can ask K-12 faculty to teach students the harm to marine life caused by trashing.  We can get the message around and that’s a start.  It doesn’t cost anything to raise the topic in conversation and ask businesses and institutions, themselves, be responsible.

Let’s wake up and realize that we all live in a watershed,  know where we are in our watershed, and know where our watershed runs and the route of our trash.  And finally, instituting penalties may attract the most attention.  We’ve become sloppy and disrespectful since the era of Lady Bird Johnson’s campaign to beautify America decades ago.  Her successful effort included signs warning of fines for highway littering.   Perhaps fines for littering public places would  get the message across most effectively that we need to keep our waste from entering the bodies of marine life. Lets keep trash where it belongs, and out of  the bellies of marine life.