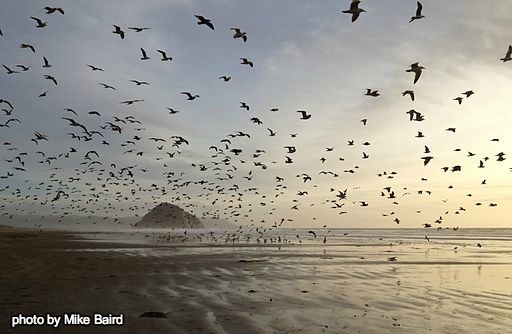 Birds play an essential, and often overlooked role in the ocean ecosystem. For example, through their feeding, they help to keep the ecosystem at a natural equilibrium state. In the Pacific atoll birds guano covers the forest floor fertilizing trees and their leaves, which later fall to the floor and create rich soil, that then flows out into the sea

“That nitrogen influences life on the way from the land to the sea. Clams living in the intertidal zones on the coasts of native forests have elevated levels of nitrogen-15. So do sponges in the reefs further out at sea. The nitrogen and other nutrients flowing out from the native forests fertilize phytoplankton — the sun-harnessing algae in the ocean — much as it does the trees on land,” explains Carl Zimmerman in his article for Yale Environment 360.

As you can see land and sea are connected by birds.

The U.S. Fish and Wildlife Service has announced its intention to prepare a programmatic environmental impact statement to evaluate the effects of creating a permitting system to reduce and mitigate for preventable sources of mortality, and draft is expected this year. The draft letter is pasted below.

2016 marks the 100th anniversary of the Migratory Bird Treaty, a landmark and unparalleled international agreement that has protected, recovered, and maintained abundant bird populations for many groups of birds, especially shorebirds, waterfowl, and herons, and has helped maintain the spectacle of bird migration throughout the hemisphere. Given current pressures on resources, habitats, and the environment, a new process for incidental take permitting is urgently needed to keep the Treaty’s implementing law, the Migratory Bird Treaty Act (MBTA) strong and relevant. The undersigned scientists respectfully urge you to advance migratory bird conservation by developing an incidental take permit process for migratory birds.

The MBTA prohibits take of migratory birds, but there is no permitting system in place to prevent avoidable and foreseeable incidental losses resulting from industrial development, or to provide for regulatory certainty for developers. Such a rule is urgently needed to help stem a broad-scale decline of migratory bird populations resulting in part from multiple sources of human-caused mortality. The U.S. Fish and Wildlife Service (FWS) has announced its intention to prepare a programmatic environmental impact statement (EIS) to evaluate the effects of creating a permitting system to reduce and mitigate for preventable sources of mortality. A draft EIS is expected this year.

The United States Endangered Species Act (ESA) includes an incidental take permit issued under Section 10 of the ESA to private, non-federal entities undertaking otherwise lawful projects that might result in the take of an endangered or threatened species.  MBTA, unlike the ESA or the Bald and Golden Eagle Protection Act (BGEPA), currently has no provision for an incidental take permit for migratory birds.  Creating the same provision to protect migratory birds would enable managers to apply best management practices to reduce mortality and mitigation measures.

The Notice of Intent includes potential options to establish incidental take authority permitting for sectors and projects that have known impacts to migratory birds such as wind power development, oil and gas drilling, communications towers, and power lines and tall towers. For each of these examples included in the notice, there are already available technologies and proven methods that can reduce bird mortality.

This policy is consistent with the Presidential Memorandum on Mitigation that would significantly improve the protection of birds covered by the MBTA by avoiding, minimizing, and compensating for avoidable threats. The FWS already has the authority to issue permits without a change to the legislation.

We urge you to stand up for the Migratory Bird Treaty Act by supporting an incidental take permit process for migratory birds. Science tells us that we’ve arrived at another crossroads for conservation. The State of North America’s Birds 2016 report, released in May of this year, collected data from the United States, Canada, and Mexico to deliver an unprecedented trilateral analysis of how our birds are faring.

The report depends on data collected not just by professional ornithologists and researchers but also by tens of thousands of citizen scientists. Analyses of these data reveal that many of our bird species are at high risk of future extinction, hastened along by habitat destruction, climate change, energy industry operations, collisions with human-created structures, pesticides, and invasive species, among other factors.

The news isn’t uniformly grim. Waterfowl have benefited from decades of concerted wetlands restoration. Hawks, eagles, and falcons have rebounded from historic lows as a result of changes in pesticide use. These successes remind us that our best hope for saving other threatened species lies in using science to drive sound conservation decisions and policymaking.

Unfortunately, today, many migratory birds protected under the Act (MBTA), 16 U.S.C. § 703 et seq., are facing serious threats and many are in rapid decline. About 30% of the birds protected by the MBTA are officially recognized by the U.S. Fish and Wildlife Service (FWS) as being in need of greater conservation efforts, including approximately 75 Endangered and Threatened species, and more than 240 species listed by FWS as Birds of Conservation Concern.

When we help birds, we help other species, including our own.  Birds provide essential ecosystem services such as pest control, seed dispersal, and pollination. They contribute to the biodiversity a healthy planet requires. Sensitive to climate change and habitat loss, they’re among our best indicators of how global ecosystems have been altered and how well we are doing at mitigating these changes.

Climate change is real and important but building renewable energy infrastructure need not – and must not – be at the expense of birds and wildlife. Migratory birds face many threats and poorly sited renewable energy facilities and their associated infrastructure, notably power lines and towers, are killing hundreds of thousands, if not millions, of birds annually, including species of conservation concern.

The Migratory Bird Treaty Act is globally significant in helping to recover, protect and maintain abundant bird populations and the spectacle of bird migration throughout the hemisphere. It is urgent to keep MBTA strong by establishing an incidental take permitting process. The undersigned scientists, representing leaders in the fields of ornithology and ecological science, fully support the FWS in developing such a process.

Thank you for helping to protect the billions of migratory birds across our country.