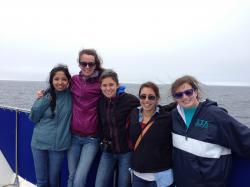 A Whale of a Time: Interns at Sea

During my time working with Turtle Island Restoration Network  as a sea turtle conservation intern, California has shown me some incredible things that I would of otherwise never have experienced in Illinois.  Amongst the coastal mountains, I’ve watched black-tailed deer graze (we only have white-tails in Illinois and no mountains to speak of).  I’ve seen orchards of citrus trees and fields of strawberries (as opposed to our rows of corn and soybeans), and this past Tuesday I saw California’s greatest treasure: the Pacific Ocean.  It was time to put months of training and education to use and jump onboard a Leatherback Watch Program expedition into the Monterey Bay National Marine Sanctuary.

In perhaps the best intern-bonding yet, the other TIRN interns and I traveled to Moss Landing to join a whale watching trip with Blue Ocean Whale Watch in Monterey Bay.  It’s a long trek from Marin County to Monterey Bay, so we left at 6:30 to make our 10 AM departure.  Luckily for the other interns, I keep tabs of all the Starbucks within a 20-mile radius, so we were able to get some caffeine coursing through our veins to wake us up.   Once we had our coffee we were fully awake and amped for our trip!

Upon arrival at the harbor in Moss Landing I was immediately impressed with the beautiful sight of all the boats lined up in the marina, but even they couldn’t prepare me for what I was about to see.  Conditions were calm and clear, a perfect day to try and spot an endangered Pacific leatherbacks sea turtle and for whale watching!  Just a few miles offshore, Kate, the naturalist on board, said there was activity ahead.  A few minutes later we were surrounded by hundreds of dolphins!  Kate informed us that they were Risso’s  and Pacific white-sided dolphins. We followed them for quite some time when all of a sudden we saw a whale up ahead!  We were able to watch a juvenile humpback play with kelp all the while swimming by dolphins.  We even saw it breach!  Even though the humpback was only a juvenile it was still HUGE.  Apparently baby humpbacks are 15 feet long at birth.  That’s three times my height! Humpbacks travel with their moms until they’re about a year old, so this juvenile was at least that old since it was traveling by itself.

Between the humpback, the dolphins, sea otters, sea lions, and elephant seals that I saw, we all had a very eventful trip.  I was able to make an announcement to the entire crew and all the passengers about the efforts of the Leatherback Watch Program, and many people signed up to receive more information and email updates from SeaTurtles.org.   After I gave the announcement they even let me sit in the captain’s chair!  It was definitely a defining moment in my life.  The only disappointment was not seeing a leatherback. Sightings are rare due to the fact that leatherback populations in the Pacific have decreased 95% since 1980.  The crew of Blue Ocean Whale Watch, however, has seen many leatherbacks already this year and they definitely had their eyes peeled hoping they could spot one for me.  I wish I could join them out on the water again on another one of the Leatherback Watch Program trips, but I must return to Illinois where there is no ocean and definitely no leatherbacks.   I am so glad I got to explore the Pacific Ocean while I was out here in California!