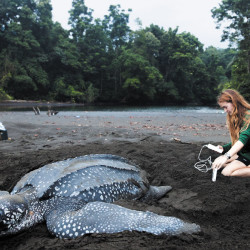 Callie Veelenturf is a marine biologist that has been working with sea turtles nesting in the Caribbean, Latin America, and Africa through 6 different turtle conservation projects since she graduated in 2014 with her Bachelors of Science in Marine Biology with a minor in Wildlife Conservation Biology from the University of Rhode Island.

Callie joins the staff of TIRN as our first Fellowship recipient. She was also our first Cocos scholarship winner and participated on the December 2017 expedition. Callie received her Masters of Science in Biology from Purdue University studying the impacts of climate change on sea turtle nesting beaches on Bioko Island, Equatorial Guinea and worked on Costa Rica’s most important leatherback nesting site. She is a PADI Divemaster and certified Scientific Diver through the American Academy of Underwater Sciences. She was recently featured in Nature Magazine as the #ScientistsAtWork Photo Competition winner for 2018. The winning photo shows her working as part of the Bioko Marine Turtle Program behind a massive leatherback sea turtle in Equatorial Guinea.