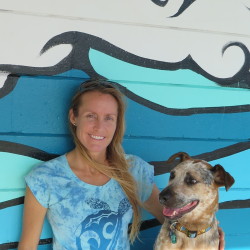 Cheryl King is a marine biologist who has been working with sea turtles for over two decades. She joined the Turtle Island Restoration Network staff in October 2017 to launch our conservation and public education work in Hawaiʻi. She holds a Bachelor’s of Science in biology/psychology from Southampton College of Long Island University and a Master’s of Science in Marine Biology from Nova Southeastern University Oceanographic Center. Throughout her career, she has worked on projects in South Carolina, New York, Florida, Costa Rica, the Caribbean, Australia, and Palmyra Atoll. Based on Maui, she has been actively involved in the Hawaiian sea turtle and ocean conservation field since 2000. Her sea turtle expertise focuses on photo-ID, nesting, in-water surveys, rescues, and “talkin’ turtles”. She is a SCUBA divemaster (but prefers freediving), is a listed author on ten scientific publications, is a marine debris nerd, and is training her dog “Tauzer” to find sea turtle nests.