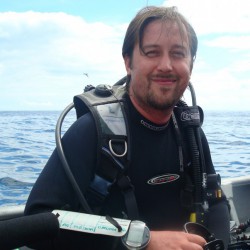 Dr. Alex Hearn is Turtle Island’s Ecuador Representative. Previously he worked as Turtle Island as Director of Conservation Science in early 2013. Previously, he worked at the Charles Darwin Foundation in the Galapagos Islands (2002-8) and was Project Scientist in the Dept. of Wildlife Fish & Conservation Biology at UC Davis (2008-13). He is one of the founders of the Migramar network, and has played an active role in publishing the science generated to date and in applying the science to policy. Alex has a BSc in Oceanography and Marine Biology, an MSc in Marine Resource Development and Protection, and a PhD in Marine Biology.

Marine Reserve ecology and management with relation to fisheries; movements and connectivity of large pelagics (hammerhead, Galapagos and whale sharks) in the Eastern Tropical Pacific; the importance of seamounts and oceanic islets as biological hotspots; green sturgeon movements; tracking and telemetry.