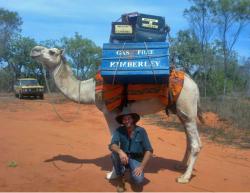 The fight against the proposed new LNG plant in the Kimberley region of Northwestern Australia is heating up with protestors blocking the access road to James Price Point. Big Oil is preparing to clear out ancient bush in order to make way for the fossil fuel boondoggle.

Thousands of postcards from people who want to protect the Kimberley are being delivered this week to the Prime Minister of Australia in Canberra.