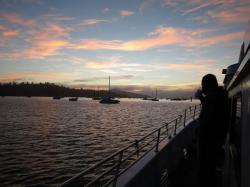 Educating the public about the biology, ecology, and conservation challenges faced by critically endangered Pacific leatherback sea turtles is always a satisfying experience for me. While many Californians take pride in their stewardship of the beautiful ecosystems in their backyard and offshore of our beaches, very few folks are aware that sea turtles call our oceans home for many months of the year.

“Really? Those sea turtles are around here? I had no idea!”

“There are sea turtles in California? Where do they make their nests? How many are there? Is it just leatherbacks that eat jellyfish?”

The leatherback sea turtle is the largest of all sea turtle species and is specially adapted to thrive when in the cold waters of the California current. The green, loggerhead, and olive ridley sea turtles frequently forage offshore of Southern California while the leatherback has been observed as far north as the Canadian border. The cold currents are home to its favorite jellyfish prey, the brown sea nettle. A single leatherback sea turtle can eat hundreds of jellyfish each day when their dense populations aggregate in ocean current convergences.

I joined an expedition with other ocean conservationists and California tourists to search for the elusive leatherback in an area where high densities have been recorded, the oceans outside of San Francisco and out to the Gulf of the Farallones National Marine Sanctuary.  The trip was part of SHARKTOBER events led by film producer and activist David McGuire and I was invited along as a guest Naturalist. Also on board was STRP volunteer extraordinaire Deb Castellena. Our vessel, the Outer Limits, was smooth as silk and the pride of the fleet for the SF Bay Whale Watching operation. We departed at dawn with a full boat and overcast skies.

The arrival at the Farallone Islands was spectacular! This small refuge is the largest pelagic sea bird nesting site on the west coast of the U.S., supporting hundreds of thousands of birds that are rarely if ever seen while on land.

Our goal was to spot rare leatherback sea turtles and document their location with coordinates and photographs. We were also on the lookout for great white sharks, which migrate to this area in the fall. And of course, whales! We had been on the boat for over 2 hours and not a single whale blow had been spotted, but as we motored south of the southeast islands, things changes quickly. A small group of humpback whales was spotted and they slowly approached our boat. We all scrambled to see them, take pictures, and smell that unforgettable “whale breath.”

Then the blue whales arrived and stole the show. Massive in their overall proportions, it is quite a sight to see the tiny dorsal fin that pokes up from the largest living creature on earth.  Our boat stopped, but the blues kept coming. We were all amazed when two blues surfaced only 100 meters from the boat, and then 3 humpbacks surfaced right in front of them! The video clip below captured by Deb documented this rare moment none of us will ever forget.

David and I spent the entire afternoon answering questions about sea turtles, whales, sharks, sea birds and the dense aggregations of krill we could see from the surface. Working in cooperation with other ocean conservationists only serves to strengthen our message, which was very well received by all on board. We had a great time doing it too, as can be seen in the photo on the right (Chris Pincetich, left; David McGuire, right).

Unfortunately, no leatherbacks were sighted on this trip. We have gathered information from several other charter operations confirming the presence of leatherbacks off of California right now, and will be publishing these soon. The work of an endangered species biologist can be difficult when attempts to gather observations of rare species are fruitless, but in this case, dozens of passengers joined the Sea Turtle Restoration Project email list, even more took our printed newsletters home to read and share, and they all saw unforgettable sights that will no doubt increase their love for the oceans and desire for their conservation.