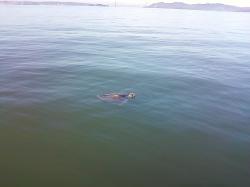 A very rare sighting of an Olive ridley sea turtle was reported in the San Francisco Bay to the Sea Turtle Restoration Project. A press release was shared with local TV news stations who broadcasts this unusual incident to millions of viewers and boaters. Please view the article on the KTVU web page or read the story below.

A rare sea turtle has been spotted and photographed in the Berkeley Marina Saturday morning during a routine patrol and a warning has gone out to boaters urging them to slow down.

Berekely Harbor Master Dominic Moreno saw the creature swimming during his morning patrol. He said the turtle appeared to be healthy, but could be in danger of being struck by a boater.

Moreno alerted marine biologists and members of the nonprofit SeaTurtles.org  to the sea creature and they chartered a boat Friday afternoon in hopes of catching a glimpse of it before it leaves.

“If I can see it this afternoon or get better photographs from other observations I can determine if it is a threatened olive ridley or the endangered green sea turtle.” said doctor Chris Pincetich with SeaTurtles.org. “It’s very rare to have a healthy sea turtle inside San Francisco Bay and with luck our members and friends will share in the opportunity to see it, learn more about it, and help us protect it and all endangered sea turtles in California.”

All vessels within the Bay are encouraged to slow down and keep on the lookout for the sea turtle, which is almost 3 feet wide when breathing on the surface.

Sea turtles are marine reptiles that typically keep to warm waters, but occasionally are seen as far north as Oregon when warm El Nino currents carry them beyond their typical range.