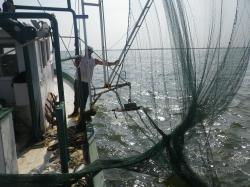 With large waves and thunderstorms offshore, I changed plans during my Gulf of Mexico expedition and joined Gregg Hall on a Louisiana shrimp trawl boat for opening day of white shrimp season. Working undercover I was able to experience firsthand the operation of one of the deadliest fisheries to sea turtles in the U.S.

Louisiana shrimpers have long defied the federal government and have refused to use required Turtle Excluder Devices (TEDs) on their trawl nets. Hundreds of sea turtles have died this year in the Gulf this spring and summer, washed ashore with no signs of oil in them but full of shrimp and sediment, solid evidence of drowning in a trawl net. Before TEDs, it was estimated that Gulf shrimpers killed tens of thousands of sea turtles every year.

On board the small shrimp skimmer boat, we headed out into Barataria Bay, off of Grand Isle. Gregg has been documenting oil, and had a strong suspicion we would be seeing lots of oil along the bottom in the trawl. He had several absorbent booms that he used to sample both the surface waters and bottom for oil.

Seeing the bycatch dumped repeatedly onto the deck and scraped and shoveled over off the gunnel was a heartbreaking and disturbing sight. Hundreds of juvenile fish of all shapes and sizes, juvenile rays, cuttlefish, squid and spawning blue crabs were injured or killed in the nets and on the deck. While quick work by myself and Gregg insured over 90% of the bycatch was quickly and carefully swept overboard alive, may fish and rays has injuries from the harsh environment in the net and on deck.

Our captain cursed the use of TEDs, and had modified his boat and normal fishing grounds to avoid their use and to stay out of federal waters where some inspections occur. Sea turtles are rarely seen in Barataria Bay, but are common offshore outside of the barrier islands. TEDs are designed to save sea turtles, but in the back bays they would keep rays, large crabs, and large catfish out of the deadly nets.

There is really no excuse for such destructive fishing methods. If shrimpers and Louisiana elected officials can not agree to use new technology in their fisheries to save sea turtles and non-target species, these fisheries should be closed.

After a day on board the Louisiana shrimp trawler, I can confidently join our STRP board member and Goldman prize winner Randall Aruaz in calling for an end to all commercial shrimp trawling, which is destroying sea turtle populations and the habitat all life in the neritic zone depends on.