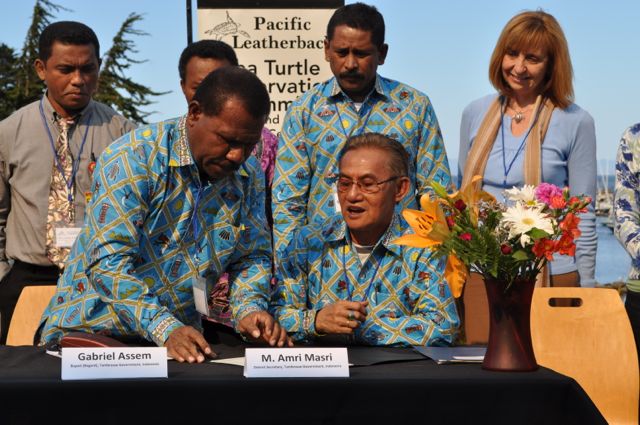 California and Indonesia Launch Partnership to Save Endangered Sea Turtles

“It is an honor to collaborate with our coalition of partners across the state and important dignitaries from Indonesia in recognizing the importance of Leatherback Sea Turtles, a majestic creature that has swam our ocean’s for millions of years and plays a vital part of the biological diversity of our ocean’s ecosystem,” said Assemblymember Fong. “The first ever Pacific Leatherback Sea Turtle Conservation Day pays homage to this species in the hope, that this inaugural event and future events will raise the awareness of the need to protect this species for generations to come.”

“The leatherback sea turtle is an integral part of cultural and natural heritage of Tambrauw, Indonesia, as symbolized by its inclusion in the official Tambrauw logo. It also represents a shared asset of the trans-Pacific nations,” said Bupati Tambrauw, a government official from the region of Indonesia where California’s leatherbacks nest. “Because of its unique characteristics and biology, the leatherback represents a biological ambassador for unifying conservation efforts throughout the Pacific. This is exemplified by this inaugural leatherback summit between Tambrauw and California which will serve as a foundation for Pacific-wide leatherback conservation.”

At the inaugural Pacific Leatherback Sea Turtle Conservation Summit hosted by California in Monterey, dignitaries from both sides of the Pacific signed a declaration agreeing to work together to ensure that leatherback sea turtle populations survive and thrive both on nesting beaches in Indonesia and in the ocean waters off the California coast where they spend most of their time.

“Cooperation between California and Indonesia will strengthen the work of both governments by connecting the two regions critical to the leatherback’s life cycle,” said California Natural Resources Agency Undersecretary Janelle Beland. “We look forward to working with Indonesia to develop innovative conservation approaches to protect the Pacific leatherback sea turtle.”

While U.S. federal agencies were unable to attend the summit due to the federal shutdown, NOAA Fisheries and Sanctuaries remain key partners for the agreement and newly established partnership.

The new conservation declaration was the culmination of the historic Pacific Leatherback Sea Turtle Conservation Summit, where scientists and political leaders convened to craft a new international agreement to forward an international conservation plan to speed the recovery and long-term survival of critically endangered Pacific leatherback sea turtles.  Participants in the summit also drafted an international Memorandum of Agreement that is expected to be signed by Indonesia, California, and the U.S. federal government in the coming months, which will make the partnership official. One potential outcome of the summit is a Sister Sanctuary arrangement between the Monterey Bay National Marine Sanctuary and protected areas off Indonesia.

Ricardo Tapilatu, a leading leatherback researcher with the State University of Papua, Indonesia, explains, “The nesting population of leatherbacks at the two main nesting beaches in the Tambrauw jurisdiction of Papua Barat, Indonesia has declined 78 percent during the past three decades. We have initiated science-based conservation efforts on the nesting beach in an attempt to reverse this decline and initiate its recovery. However, the recovery of the leatherback is dependent upon a Pacific-wide approach. The current leatherback summit unifies conservation efforts at both ends of the leatherback’s trans-Pacific migration, the primary nesting beach and the major foraging ground.”

“If we are going to prevent the extinction of species that cross international borders, we need to take action beyond our own borders.” said Geoff Shester, California Program Director for Oceana, whose organization served as the lead organizer of the event. “Our leatherbacks are ambassadors that link Californians to our new partners on the other side of the world.”

Every summer and fall, Pacific leatherbacks migrate from their nesting beaches in Indonesia to ocean waters off the West Coast of the United States to feed on jellyfish — a 12,000-mile round-trip journey. According to Scott Benson, marine ecologist with the National Marine Fisheries Service, “Leatherback turtles don’t recognize international borders, so it is the responsibility of people in all Pacific nations to protect this species wherever it occurs. Improved international coordination that is implemented at the local level is essential for the conservation and recovery of leatherback populations in the Pacific.”