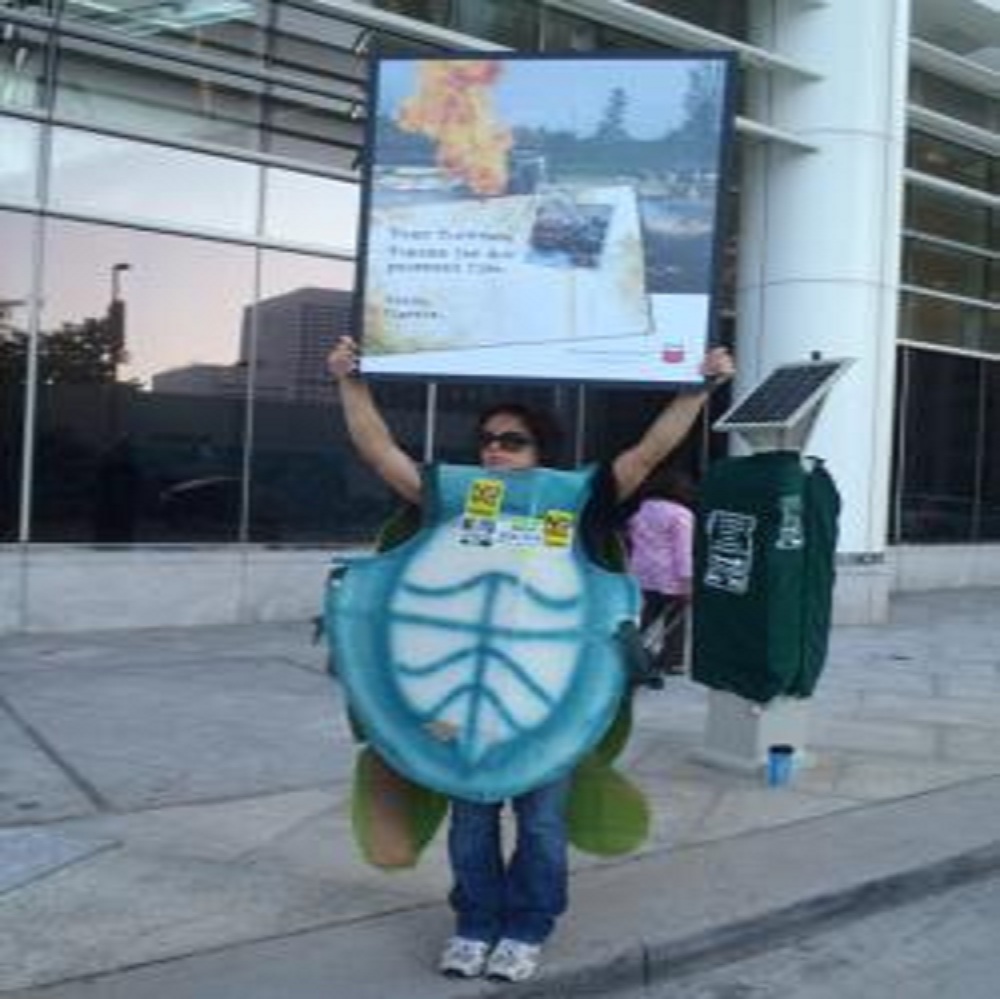 Outside the former Enron building at 1500 Louisiana St. where Chevron is now located, sea turtle activists joined people from around the world on the sidewalk to protest the oil company’s harm to people, sea turtles and the environment from its operations around the globe.

“Stop building dirty energy on the backs of sea turtles!” called Teri Shore, Program Director for Turtle Island Restoration Network from behind the police barricades. Shore was one of several protesters who donned turtle costumes to oppose Chevron projects in sea turtle habitat. She is also an author and co-sponsor of the Chevron Alternative Annual Report. “Here in the Gulf of Mexico, endangered sea turtles are facing a major oil slick while across the globe Chevron is putting an end to an entire sea turtle population. Oil and sea turtle don’t mix.”

Inside the meeting, Director George Kirkland heralded Chevron’s massive $37 billion Gorgon natural gas plant which is being built on top of a flatback sea turtle nesting beach in Western Australia, calling it “enormous” and “a model of environmental stewardship.” The project will harm or kill 1,000 or more nesting sea turtles and surrounding marine habitat and was opposed by environmental authorities. Chevron is also building several other natural gas plants in the region that the sea turtle community is convinced will harm or destroy little-known populations of flatbacks, greens, hawksbills and loggerheads.

Of the 37 delegates from human rights and environmental community with validly executed proxy statements, only seven were allowed to enter the meeting, contradicting Chevron’s own policies and in potential violations of corporate governance laws.

Of the five arrested, one was Antonia Juhasz, Lead Author of “The True Cost of Chevron: An Alternative Annual Report”. Juhasz was dragged from the meeting as shareholders and their proxies chanted, “Chevron Lies, People Die” and CEO John Watson abruptly ended the meeting.
Others arrested included Reverend Ken Davis, a member Community for a Better Environment, from Richmond, California, Juan Parras of Houston-based Texas Environmental Justice Advocacy Solutions (TEJAS), and Mitchell Anderson and Han Shan of Amazon Watch; all arrested after being denied entrance. AmazonWatch works with Ecuadorian leaders like Guillermo Grefa, who was also denied entrance.
Before his arrest, Reverend Davis stated “I represent an area where there is no beauty shop, groceries, or cleaners. Our industry is Chevron. My people breathe their contamination every day and are constantly sick. Our health is not for sale.”

Josh Coates from the Wilderness Society of Australia was denied admission into the meeting had a message for CEO Watson: “Today I’ve been denied the opportunity to give a clear message to Chevron and the shareholders that the proposed liquid natural gas processing facility in the Kimberley region of northwest Australia comes with unacceptable environmental costs. The Kimberley region in the west of Australia is a last refuge for many species in the region, including humpback whales and the endangered Australian flatback turtle. Chevron is pushing an off-shore processing facility in the home of the humpback, while other options exist.”

The True Cost of Chevron Network will continue its effective alliance to expose and challenge the oil giant. For more information on the Network, visit www.truecostofchevron.com