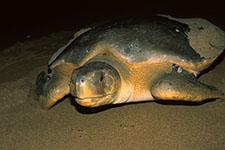 Chevron gas project a disaster for sea turtles in Australia

Chevron’s Gorgon project in Northwestern Australia south of Port Hedland is a disaster for sea turtles which nest on Barrow Island. The project was approved by the Australian government despite opposition from environmental groups and its own environmental advisors.

Since Chevron has taken over the existing oil drilling rigs on Barrow Island, environmental protection has gone downhill, according to people who have worked there. Australian flatback sea turtles nest on the remote island and forage and breed in the surrounding waters. This rare sea turtle nests only in Australia and is protected by the government. Yet that has not stopped the Western Australia government’s new premiere Colin Barrett, a conservative, from giving it the green light.

The project is also dependent on very questionable carbon sequestration technology, where the excess CO2 from natural gas production will be pumped under the island instead of released into the atmosphere. This approach has never been proven to be safe or environmentally sound.

Up the coast in the Kimberley, fossil fuel giants want to build even more dirty plants for natural gas processing that would destroy a relatively intact eco-system. Chevron and the other oil barons need to pull back. See more at www.seaturtles.org and http://www.savethekimberley.com/