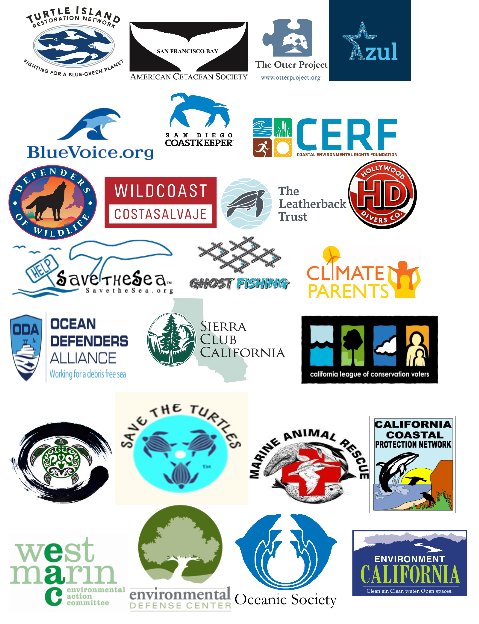 Olema, Calif. (May 9, 2016) – More than 30 environmental, ocean, conservation, and activist organizations representing over 1 million members signed on to a joint letter today led by Turtle Island Restoration Network calling on California Senators and Assemblymembers to support Senate Bill 1114. This bill would end the most harmful fishing practice on the West Coast by reducing the number of damaging driftnets off the California coast by phasing out remaining driftnet fishing permits and transitioning to more sustainable deep-set buoy gear. Senate Bill 1114 is authored by Senator Ben Allen (D-Santa Monica) and sponsored by Turtle Island Restoration Network. It lays out a clear and thoughtful plan for a more sustainable future.

“This bill makes sense for California as seen by the strong coalition of supporters that have signed on to our petition to phase out driftnets,” said Cassie Burdyshaw, advocacy director of Turtle Island Restoration Network (SeaTurtles.Org), which organized the coalition of environmental groups and is the sponsor of SB1114. “We have the technology to do better. Now it is time to end the pointless slaughter of marine wildlife and endangered species.”

The petition, led by Turtle Island Restoration Network comes after the bill passed on a 7-2 vote through the California Senate Committee on Natural Resources and Water. On May 16th, the Senate Appropriations Committee will consider the bill. The bill would put a stop to the decades of irresponsible fishing for swordfish, and modernize the out-of-date fishery by incentivizing the use of more sustainable fishing gear.

Currently, the driftnet fishery in California consists of less than 20 fishing vessels. The vessels set out nets the size of the Golden Gate Bridge to float overnight and indiscriminately catch whatever swims into their nets. The California driftnet fishery kills or injures approximately seven times more whales and dolphins than all other observed fisheries in California, Oregon, Washington, and Alaska combined, and 13 times more than any other single observed fishery on the West Coast. In one decade the fishery killed an astounding 885 marine mammals. Eliminating the use of driftnets would instantly reduce the observed U.S. West Coast marine mammal catch by 87 percent. Furthermore, the cost of operating the fishery is more than the value of its catch.

“Driftnet fishing is an antiquated practice with no place in the modern world, let alone California. These indiscriminate bycatching walls of death are putting our endangered oceanic species at risk, and are costing us, as well as the ocean, a lot more than just the taxpayers dollars to prop up a losing swordfishery,” said Brock Cahill of Kurmalliance.

“SB 1114 is a giant step forward in transitioning California’s swordfish fishery to more sustainable fishing practices,” said Joshua Hanthorn, California representative for Defenders of Wildlife. “The driftnet fishery in California has indiscriminately wreaked havoc on a plethora of non-targeted marine mammals, including sea turtles and sharks – it’s time to put an end to this careless and deadly practice.”

“It is unbelievable that California, known as a progressive state, where visitors from all over the world come to behold our beautiful coast is so behind the environmental evolution and allows Driftnets that are the length of our Golden Gate Bridge, for commercial fishing. It is time for California to pass SB1114 and bring CA to the 21st century (other states and countries have already banned this deadly practice),” said Debra Sherman, executive director of Save the Turtles.

“An estimated 90 percent of turtles are now gone from the Pacific Ocean. We have the power right now to do something about this. By allowing this destructive fishery to continue, we are condoning what could very well be extinction,” said Heather Hamza of Ghost Fishing.

“At least 11 different species of whales and dolphins have been killed by this fishery.  This is not bycatch, it’s carnage,” said Regina Asmutis-Silvia, the executive director of Whale and Dolphin Conservation.