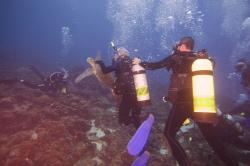 I arrive in Costa Rica only to find that my checked luggage no longer contained the epoxy and sealant needed to attach the satellite transmitter to the turtles.  Did it disappear in the US or Costa Rica?  The mystery remains…Luckily, I had packed my most critical gear (transmitters, prescription mask, contacts) in my carry-on and there was time to track down the needed adhesives in Costa Rica before we left.

Diego Amorocho, a turtle biologist from Colombia was not so lucky.  His checked luggage didn’t arrive at all, and he set sail with us without his clothes, or his dive gear…

We left Puntarenas sometime after noon, and the trip out proved to be a bit rocky.  Several folks besides myself were feeling a bit queasy… the sighting of several humpback whale breaches though, lifted our spirits!  Thirty hours later, right after dark, the engines faded to silence—signaling we had arrived!  All feelings of seasickness evaporated and we would be diving in the morning.

What a day!  Four green turtles captured. Three of the turtles get satellite transmitters, all four get acoustic receivers and permanent flipper tags.  We also collect several white tip shark genetic samples.  During the work, we encounter a ~25 foot whale shark, thousands of big eye jacks spawning with silky sharks swimming through the giant school, amorous male white tip sharks chasing females, dolphins, hundreds of marbled rays, and we still have time for a night dive, where we get to watch hundreds of white tip sharks feeding in a giant school.  What more can I say…

We have several new participants and a few repeat volunteers.  Two of the new folks include two old friends from college, Matt and Chris.  Chris, aka “Happy,” is a surgeon and Matt is a dentist.  After hearing the woes of losing our signal from the two turtles we put satellite transmitters on in March, and seeing our operation, their expertise clicked into gear, and discussions of using human surgical techniques of attaching plates to broken skulls, and the latest adhesion technology used in teeth have generated several alternatives we may try in the future.  Not only do they have ideas, but they promise to use their connections with the company representatives to try to get us some free samples!  And Matt also promises when he gets back to have his sail-maker friend make us a sling for moving big, heavy turtles from the “panga” to the main vessel where we attach the transmitters!  This is exactly the kind of collaboration that makes my heart sore… people using their skills to help protection the oceans!