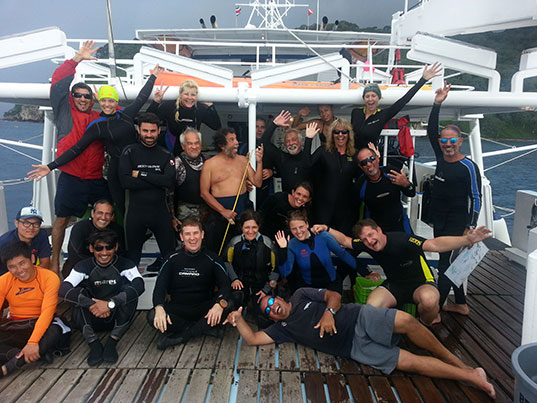 Turtle Island Restoration Network is sponsoring graduate student Elena Nalesso in her efforts to better understand the sharks of the Cocos Islands. Elena is currently completing her thesis on the island’s hammerhead sharks and recently returned from her first Cocos Island Expedition from June 22nd to July 5th with Turtle Island, Fins Attached and PRETOMA. On the trip Elena completed 22 dives and assisted with research efforts to track and monitor the sharks.

“One special moment was when on the second day. Someone thought they saw a turtle, but it turned out to be a whale shark! It was only about three meters (or about 10 feet), which is small for that particular species of whale shark, but we were able to watch it for quite awhile,” she said. “Another was on the fourth day when we were at Manuelita. We saw dolphins underwater. I had never seen dolphins underwater. They were curious and came over to us. There were lots of bubbles from of regulators and a tuna came over as well to see what was happening, and then silky shark came over to investigate. It was brilliant.”

During the two-week expedition, Elena, fellow researchers and citizen-scientists placed acoustic tags on a hammerhead shark and a Galapagos shark. They also took six genetic samples from different sharks.  The underwater acoustic receivers (which can detect small tags placed inside sharks and other fish) and satellite tags on sharks rely the information to scientists. Data from these tags will tell researchers how sharks are moving between oceanic islands and marine protected areas. Read more here about the tags here.

This is no easy feat given that sharks are “afraid of divers bubbles” and that the entire tagging process must be completed seamlessly in a very short amount of time.  Elena had read about the various tagging techniques but never had the chance to see, and assist with them first hand until this trip.

“Reading about how to place the acoustic tags is very different than being out there in person.  You read and wonder, ‘how difficult is it to put a tag on a big shark?’ but you don’t know. It is hard,” she explained, noting that in only about 80 or so tags have been placed on sharks in this area in the past ten years.

Elena has an eclectic background. She is Italian, she grew up in Costa Rica, completed her undergraduate degree at the Universidad de Cadiz in Spain, and is currently finishing her master’s thesis at Centro de Investigación Científica y de Educación Superior de Ensenada (CICESE), a Research Institute.  Elena has already seen a lot of the above-sea-world, but her favorite place to explore is underwater where she can observe and study sharks. 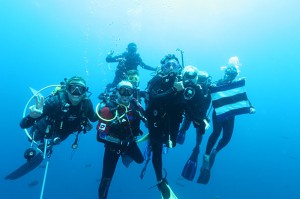 Elena began scuba diving at age 12 and is now a dive master. She is at home in the water and thinks that more people should take the plunge and go on an expedition.

“This kind of trip involves people, not just scientists, in helping protect these sharks. Research alone cannot save and protect them, but people can.”