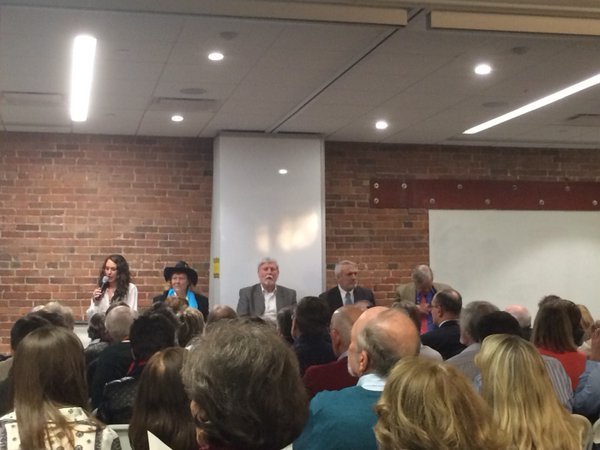 I had the opportunity to attend “The Road Beyond Paris,” last night at the Alliance Center in Denver. Leaders in Colorado who participated in Paris Climate Change Conference,  COP21, Colorado Senator and United Nations Foundation President Tim Wirth, Former Governor Bill Ritter, COP21 delegates Hunter Lovins, founder and director of Natural Capitalism Solutions, and Bill Becker, executive director for the Presidential Climate Action Project, hosted a panel discussion in front of a full house. The event was sold out and speakers addressed a room of over 170 visitors.

All the speakers agreed that the fact that nearly 200 nations came together to sign the agreement, now known as the Paris Accord was an incredible feat of diplomacy and politics.

Wirth encouraged the audience to think about the substance of the accord in four sections:  Mitigation (i.e. reducing carbon dioxide emissions), Adaptation (i.e. sea walls, support systems for climate refuges), Technology (investiagting ways to take carbon out of the atmosphere with tech), and Finance (discussions of how to fund all of the above). He then further explained that from his point of view the Paris Accord showed two main things: 1. global responsibility for climate change, and 2. that the U.S. and China were both able to come to an agreement.

Former Governor Ritter then jumped in and discussed his role as a delegate. Given the current House and Senate in the U.S., the U.S. State Department wanted Ritter and other local city and state leaders to be present to discuss how the agreements stated goals could practically be met at a local level.

Lovins spoke to the important role of business and companies in pushing changes ahead of legislation, and taking personal responsibility by divesting from coal or choosing not to use single-use plastics.

The groundbreaking agreement aims to “keep global temperature rise this century well below 2 degrees Celsius and to drive efforts to limit the temperature increase even further to 1.5 degrees Celsius above pre-industrial levels,” explained the United Nations in its press release.