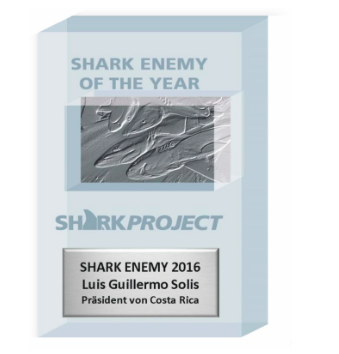 February 1, 2016 (Düsseldorf, Germany) – Over the weekend at the BOOT (Boat) trade fair in Düsseldorf, the international shark protection organization SHARKPROJECT introduced the winner of this year’s SHARK ENEMY award – Costa Rica. Turtle Island Restoration Network agrees with the jury’s decision to award Costa Rica this dishonor, which is the only shark protection “award” of its kind in the world. A jury made up of 31 marine protection organizations unanimously agreed that Costa Rica was a hotspot for the shark fin trade.

Costa Rica has received the SHARK ENEMY AWARD before in 2006 under the leadership of President Abel Pacheco, and the SHARK GUARDIAN AWARD in 2013 under President Laura Chinchilla Miranda. President Chinchilla prohibited the shark fin trade, and turned Costa Rica into one of the world’s leading shark protecting nations.

“All of the legally approved measures for the protection of the sharks were systematically cancelled by President Solis [and] his government passed several new laws and ordinances that promote shark fishing and the shark fin trade.”

The SHARK ENEMY award will be presented by the SHARKPROJECT partner organization PRETOMA in San José, Costa Rica.