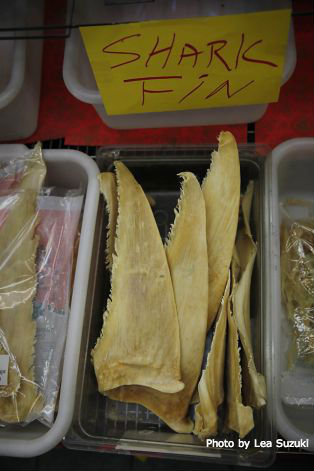 Quito, Ecuador (May 29, 2015) – Yesterday, the Ministry of Interior of Ecuador released a video showing Vice Minister Diego Fuentes explaining that 200,000 shark fins (which corresponds to roughly 40,000 sharks) had been seized in a series of operations. The Ecuador government arrested three people and confiscated several fire arms.

In the video, the Vice Minister explained that according to the Presidential Decree 486 (2007) sale of shark fins is permitted, but only if the sharks have been landed as bycatch.

“How do we determine that this is not bycatch? There are catch records from vessels when they arrive in port, which must show how much bycatch is landed along with the target catch. Over the past six months of police investigation, we found that the vessels were basically only bringing shark fins, and in most cases the bodies were dumped at sea. The Decree bans shark finning at sea. Bycatch should be a minimal part of the total catch, while here it is clear that there is a targeted operation. The plan was to smuggle the fins to Peru, from where they could be exported legally to Asian markets. In these installations they had a dedicated processing facility set up, a transport infrastructure and a framework for hiding their activities. Each set of five fins is worth about $60-$80 U.S. dollars so we are talking about a huge sum of money involved. It is important to highlight that all these fins were taken in the last month or 20 days. This is not a long term storage facility.” See the full video in Spanish here.

In 2004, Ecuador set a regional precedent by banning the possession, sale and export of shark fins. However, this ruling was overturned in 2007 due to concerns that the shark finning industry had gone underground, and due to pressure from fishermen claiming that shark meat was an important source of additional income as marketable bycatch. The current regulations ban the targeted fishing for sharks in all Ecuadorian waters, and prohibit the use of certain types of hook and steel leaders on fishing lines typically used to catch sharks. It does allow for the use and sale of sharks caught as by-catch, so long as these are landed whole and declared to the Fisheries Agency.

“While the Government of Ecuador should be congratulated on its investigation and decisive action against these criminals, it is clear that a targeted fishery for sharks does exist in Ecuador, and this needs to be addressed,” said Turtle Island Restoration Network’s Conservation Science Director Alex Hearn. “At the time of the Decree, there was concern about the definition of bycatch and how this might be used as a loophole. We will be following the judicial processes with great interest, in the hopes that an exemplary conviction will be meted out.”

Turtle Island is a leading shark and marine conservation organization that works in the Ecuador and the Eastern Tropical Pacific. Turtle Island is working to create a marine protected ‘swimway’ that will protect endangered sharks in Ecuadorian waters.