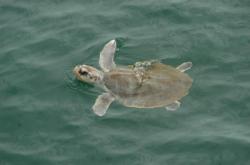 Are you ready to tell the Kemp’s ridley sea turtle, the official sea turtle of Texas, goodbye? That’s not a far-fetched notion. Their future is uncertain if the federal government continues to push them toward extinction.

A little history lesson offers context for those not familiar with the ridleys’ struggle. In the early 1980s, the Kemp’s ridley sea turtle, often called the “Heartbreak Turtle,” was very close to extinction with only a few hundred females nesting on the northeast Gulf Coast of Mexico and in Texas. Unwilling to allow this small sea turtle to join the passenger pigeon, the Carolina parakeet and many other species in extinction, the U.S. government began making efforts to save it.

The U.S. Fish and Wildlife Service in 1981 allocated money to the Gladys Porter Zoo in Brownsville, funding the zoo’s support to the Mexican nesting beaches of the Kemp’s ridleys. After that, 2,000 eggs were brought each year to the Padre Island National Seashore as a gift from the Mexican people. The eggs were incubated there and then hatchlings were moved to the Galveston sea turtle facility of the National Marine Fisheries Service facility, where they were raised for about 10 months. Hatchlings were then released into the Gulf. Public support quickly forced the Marine Fisheries Service to promulgate regulations that forced the shrimp industry to use turtle excluder devices to prevent sea turtles from drowning in shrimp trawls. The trawls were widely believed to have contributed to the turtles’ decline.

The Bi-National Recovery Plan for the Kemp’s Ridley Sea Turtle, originally agreed upon by the Fisheries Service, the Fish and Wildlife Service and Mexico’s environment ministry in 1984, asked for a number of successful conservation practices to be continued until there is an average population of 40,000 nesters per season over a six-year period.

The recovery plan includes a list of “Actions Needed,” many of which had helped the Kemp’s ridleys’ population increase exponentially through 2009. They include common-sense recommendations that need to be continued, such as requiring shrimp fishermen to use turtle-excluder devices. Unfortunately, within the past few years, U.S. government agencies have withdrawn support for many of the policies that had set this endangered sea turtle on the path to recovery.

For instance, within the past few years, our government has stopped implementing the international agreement, as prescribed in the recovery plan’s “Actions Needed,” by cutting funding for the Mexican conservation program for the Kemp’s ridleys. In 2015, no money will be given to bolster the operations of the nesting beaches in the state of Tamaulipas. The Bi-National Plan identified lack of funding as a threat to Kemp’s ridley recovery.

The Recovery Plan states that “we anticipate that the Kemp’s ridley will attain its down-listing criterion (hitting the goal allows reclassification of the turtle from an endangered species to threatened) of 10,000 nesting females in a season by 2021. Based on population growth rates of 19 percent per year, we anticipate that the Kemp’s ridley could attain its delisting criterion (removal of the turtle from federal lists of endangered or threatened wildlife) of an average of 40,000 nesting females per season over a six-year period by 2024.” Their future is no longer that rosy. Nesting, which ended last month, continues to decline in both Texas and Mexico, and no one seems to be looking for the reasons.

Unless the people of the United States demand a change in the policies of the Fish and Wildlife Service and the National Marine Fisheries Service, the Kemp’s ridley will be on its way to extinction by 2024 instead of delisting from the Endangered Species List.

Since our government agencies are not keeping their word with Mexico or meeting their responsibilities under the Endangered Species Act, they are placing the endangered “heartbreak turtle” in jeopardy again.