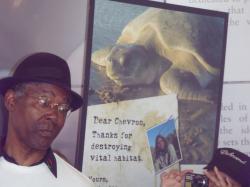 Program Director Teri Shore and Gulf Director Carole Allen called on Chevron to stop harming people, the environment and sea turtles at a press conference in front of the oil company’s headquarters in Houston. Josh Coates of Wilderness Society in Australia also took the stage to point out Chevron’s harm to turtles, whales and sacred lands in Australia.

Carole gave out press releases to the camera people from various news stations that said: “Sea turtles and oil don’t mix. It’s time to stop building oil and gas facilities in sea turtle habitat.” The Kemp’s ridleys in Texas are in danger from the Gulf Oil spill while flatbacks in Australia are losing nesting beaches to the Gorgon natural gas plant. In Angola, Chevron is claiming to protect sea turtles from its operations, but activists in Angola say it is just PR. See our press release.

After statements from people from around the world, the crowd of 30 marched into Chevron’s lobby demanding a meeting. Antonia Juhasz of Global Exchange requested a meeting with Chevron CEO John Watson. The company’s Public Relations representative refused a meeting but listened to activists from Richmond, CA; Nigeria, Ecuador and Colombia demand an end to practices that are killing people, poisoning water and devastating forests and homelands.

Many will go to the Annual General Meeting tomorrow, while the rest of us will be rallying outside in turtle costumes. Our new No Drill, No Spill stickers were on display today and will be given out by the thousands at the rally!