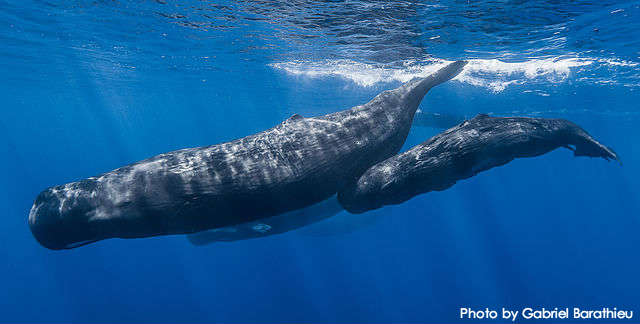 Olema, CA (April 15, 2015) — A 50-foot endangered sperm whale washed ashore this morning at Pacifica Beach located near the town of Pacifica, Calif. Scientists from the Marine Mammal Center and the Academy of Sciences will perform a necropsy on the whale to discover the cause of death, which is currently unknown.

Sperm whales, like the huge toothed whale that washed ashore this morning, are federally endangered species. Due to whaling in the 17th century they were nearly hunted to extinction, now the main threat to these large-headed cetaceans is industrial fishing – in California the main threat comes from the driftnet fishery for swordfish.

“We don’t know yet why this endangered whale died, but we do know the California driftnet fishery entangles, injures and drowns this species way too often.  Was this whale injured by this fishery months ago, and is just succumbing and washing ashore now?  Hopefully the necropsy will provide us with some answers,” said Todd Steiner, biologist and Executive Director of Turtle Island Restoration Network.

This fishery sets out mile-long nets in the water and catches, harms or kills whatever happens to swim into those nets – including endangered sperm whales. This California fishery of 50 boats is among the worst 20 percent of all fisheries globally by bycatch. In 2010, the killing of two sperm whales by the California drift gillnet fishery was observed by National Marine Fisheries Service observers, showing that this fishery is estimated to kill 16 whales per decade. This rate, combined with deaths caused by other west coast fisheries, could seriously endanger this long-lived species. This same story is repeated for species after species of endangered sea turtles, sharks, tuna, and fin fish.

Last August, Turtle Island and partners filed a notice of intent to sue federal regulators for failing to extend emergency rules to protect sperm whales from extinction that would have required the fishery shut down were another whale caught.  Turtle Island has been awaiting final rules from the federal government to see if adequate measure to protect these endangered species before deciding to proceed with a lawsuit.

“Endangered whales should not be dying cruel deaths in Golden Gate bridge-sized California driftnets to provide high-priced luxury swordfish steaks,” said Doug Karpa, legal program director of Turtle Island Restoration Network.  “Californians are right to demand that our fisheries be sustainable.  Since this fishery threatens sperm whales as well as at least a dozen other threatened species, this fishery should have been closed down already.”

Background
Drift gillnet fishing for swordfish involves setting out mile-long nets at dusk that drift freely where sperm whales, fish, sharks, sea turtles, and marine mammals feed or migrate during the night. On average this California fishery — which operates primarily between Aug. 15 and Jan. 31 — catches and discards dozens of protected whales, dolphins, seals and sea lions each year, in addition to thousands of vulnerable sharks and other fish according to the National Oceanic and Atmospheric Administration.

###
Turtle Island Restoration Network is an international marine conservation organization headquartered in California whose 150,000+ members and online activists work to protect sea turtles and marine biodiversity in the United States and around the world. www.seaturtles.org