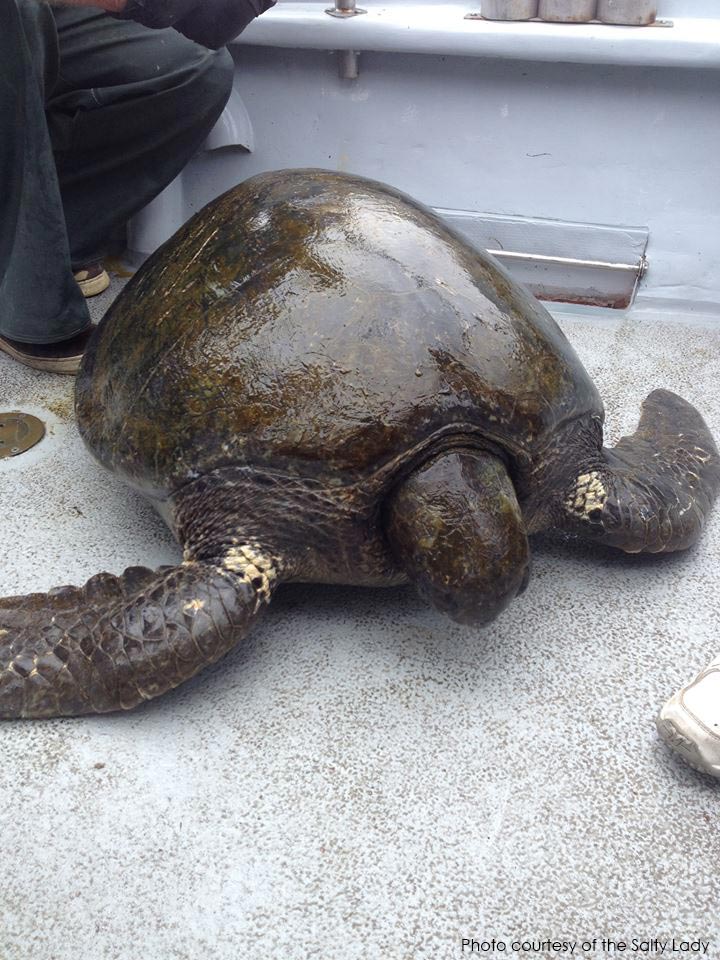 Endangered turtle pops up outside the Gate, about 2,000 miles from home

Pacific green turtles are mostly found in Mexico and to the south, though there is a small population that resides near the power plant in San Diego Bay. But the nearest significant nesting population is found in the Mexican state of Michoacan, more than 2,000 miles south of Marin, said Todd Steiner, biologist and executive director of the Marin-based Turtle Island Restoration Network.

“It’s usually too cold up here for a green turtle,” Steiner said. “Finding an endangered green turtle in the cold waters (outside the Golden Gate) is extremely unusual, even during warmer water temperatures during an El Nino event.”

But that’s exactly what happened last weekend when the Sausalito-based Salty Lady and captain Roger Thomas made their way out to open sea on a fishing trip hoping to snag chinook salmon, but instead hooked the green turtle.

Thomas has been fishing area waters since 1968, and while he has seen giant leatherback sea turtles off the coast, this was the first hard-shell turtle he has ever seen get hooked off his vessel.

“I’d never seen a turtle like that before, but you never know what you will see in the ocean,” said Thomas, who also runs nature excursions through the Oceanic Society. “The turtle was hooked, so we brought it on board and got the hook out and then put it back gently in the water and it swam off.”

On his trips Thomas records water temperatures and he has noticed warmer waters this summer, between 61 and 64 degrees. Typically, temperatures reach about 60 degrees, he said.

The green turtles are listed as endangered under the U.S. Endangered Species Act due to overharvesting of adults and eggs. Green turtles are long-lived, reaching sexual maturity at 20 to 50 years of age; adult females return to their natal beach to lay their eggs. They eat algae as well as fish and invertebrates.

As late as the 1960s the turtle was still abundant in its major nesting grounds in North America in Mexico, according to the U.S. National Marine Fisheries Service. In the early 1970s large numbers of green turtles were discovered near Tiburon Island in the Gulf of California and hunting for turtle meat intensified by mid-decade. That site was decimated and the species was “virtually extirpated” from the Gulf of California by the late 1970s, according to the fisheries report.