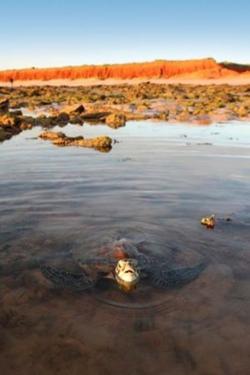 Enviros Save Kimberley from Gas Plant in Australia

Today activists in the Kimberley of Australia are celebrating a major victory in the fight to save wild and sacred lands on the pristine coast of Northwestern Australia from a massive natural gas plant near the town of Broome.

The oil-giant’s decision that the project was no longer economically viable masked the true success of the Broome No Gas Community and Aboriginal leaders who conducted almost daily actions against the project.

“It’s time to cheer, cry and hug for this enormous win over Big Oil and complicit politicians who could care less about destroying the wild and sacred Kimberley coast,” said Teri Shore, Program Director, Turtle Island Restoration Network in California. “When I return to the Kimberley this year, I’ll walk the turtle beaches and watch whales without the awful looming of this ugly project.” Shore generated opposition to the Browse Basin gas plant from major U.S. environmental groups and thousands of people in North America.

“Today’s outcome is a testament to people power,” said campaigner Jenita Enevoldsen of The Wilderness Society of Western Australia in Perth. “It shows that communities are capable of stopping inappropriate developments, even when those developments are worth $45 billion, lead by some of the most powerful companies in the world, and backed by governments.”

However, Environs Kimberley says Woodside’s announcement to look at options offshore for processing Browse gas still leaves the door open to a project at James Price Point and is not a victory for the Kimberley.

“This is a huge relief for the local community because people have been traumatised beyond belief but we are still ready to stop the project and won’t give up till its gone,” said Environs Kimberley Director Martin Pritchard.

Turtle Island Restoration Network helped put sea turtles front and center in the campaign to halt the project due to its harm to marine life that relies on the Kimberley coast for feeding, migration and breeding.  Click here to read more about TIRN’s contributions to stopping the project.