Kemp’s ridley sea turtles (Lepidochelys kempii) are the smallest and most vulnerable species of sea turtle in the world (1,2). They weigh only 100 pounds at most in adulthood and get up to 2 feet long (1,3). Kemp’s ridleys have a limited habitat, nesting in just two countries in the Gulf of Mexico (3). This means that the Kemp’s ridley is particularly vulnerable to localized threats like commercial fishing, egg harvesting, and oil spills (1,2,3). 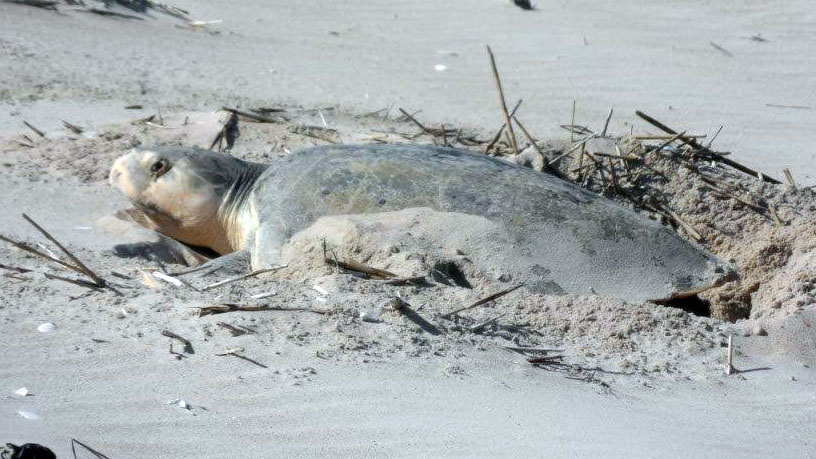 This tiny species makes a dramatic entrance come nesting season. Kemp’s ridley nest in ‘arribadas.’ Spanish for arrival, arribadas are a spectacle to witness. Wave upon wave of females come crashing ashore, laying their eggs in broad daylight unlike any other sea turtle in the world (1,4). From April to July, females will do this up to three times, burying approximately 100 eggs each time in freshly dug holes on beaches in Mexico, Texas, and Florida (1,2,3).

Little hatchlings emerge from their holes in the sand after two months of incubation and head straight for the open ocean, eager to evade any near-shore predators that might be lurking (1). For the first two years of their lives, hatchlings ride the tides up and down the Atlantic coast, from as far north as Nova Scotia and as far south as Bermuda (1,2,4). 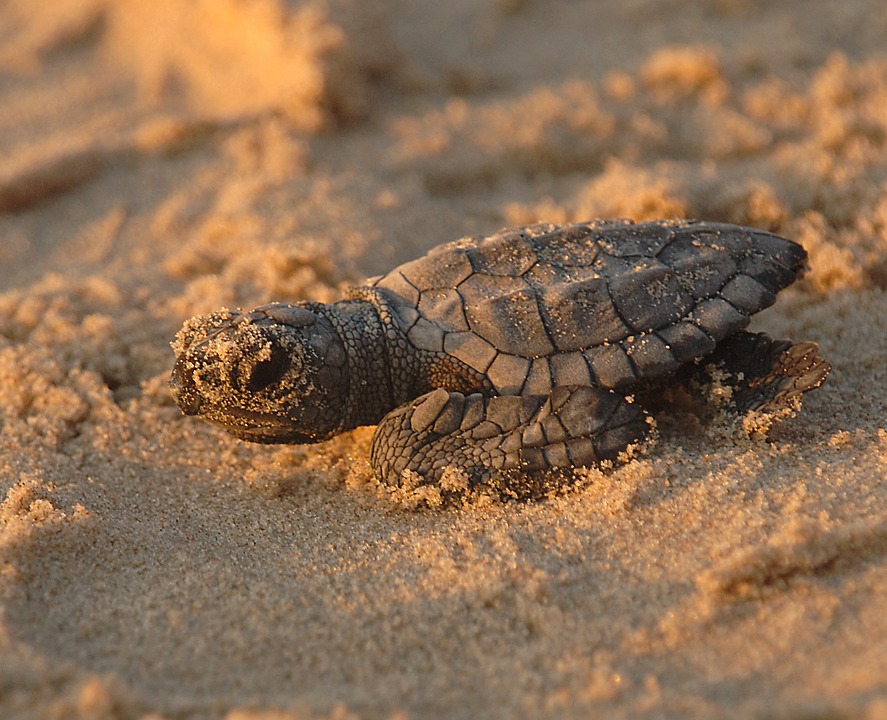 After two years of travelling the coast, adolescent Kemp’s ridleys return to the Gulf of Mexico (1,2). Here, they forage for swimming crabs and other hard foods, rarely diving deeper than 160 feet during their adult life. Some will migrate in search for food but, come adulthood, Kemp’s ridleys are not known to wander far (1).

After ten years of living in the Gulf, Kemp’s ridleys reach sexual maturity. Like their parents before them, they return to important nesting sites in Mexico, Texas, and Florida to lay their eggs (1).

Kemp’s ridley sea turtles are listed under the US Endangered Species Act and as IUCN Critically Endangered (2,3). They are more endangered than any other species of sea turtle (1). Slowly, though, Kemp’s ridley populations are recovering (1,2).

Much of the initial decline in Kemp’s ridleys was due to direct harvesting of eggs and adult turtles. Most Kemp’s ridleys lay their eggs at the same time on a single stretch of beaches in Tamaulipas, Mexico. Their eggs are thus extremely concentrated, making them an easy target for harvest and costing their population tens of thousands of turtles in the early 1900s (4). Egg harvesting was made illegal in 1966, and this threat was significantly reduced (1,2).

Kemp’s ridleys’ greatest threat is the commercial fishing industry. In particular, shrimp trawls have damaged their population quite dramatically by indiscriminately scooping up and jeopardizing the lives of everything in its path, including sea turtles. Fortunately, the shrimp industry is now required to use Turtle Excluder Devices (TEDs) in both the U.S. and in Mexico. These devices allow sea turtles to escape through a hatch in the nets, and they have greatly reduced sea turtle mortality from shrimp fisherman (1,2). Still, sea turtles continue to get caught and die in shrimp trawl nets. 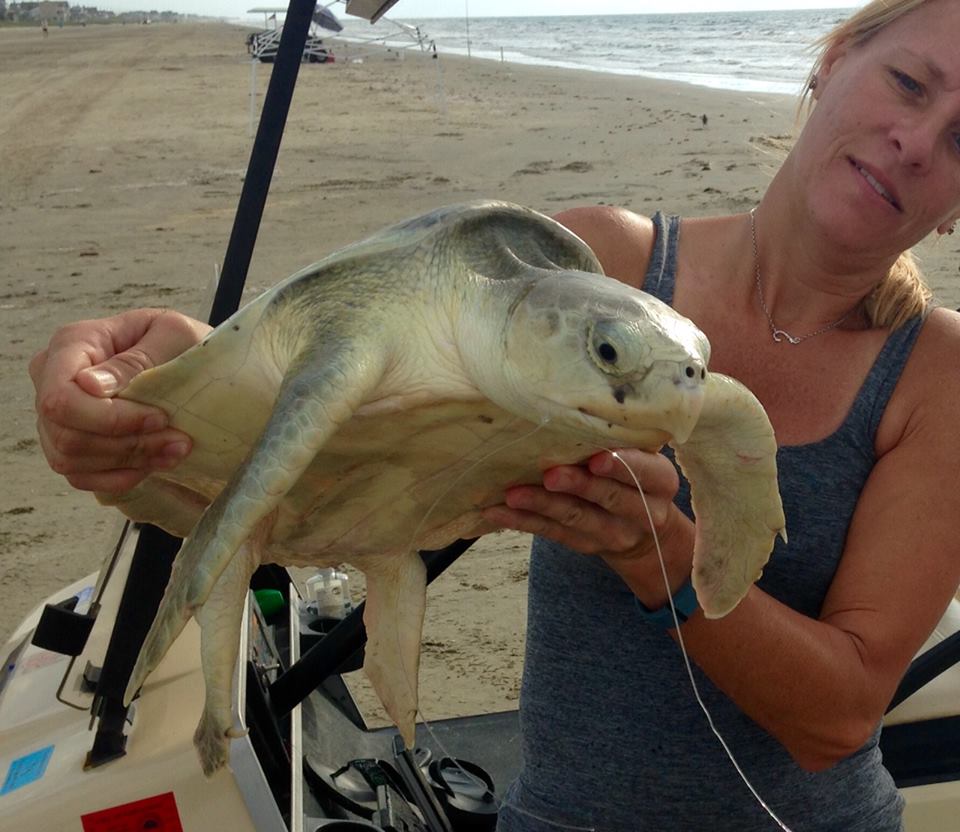 Since the enactment of harvest and commercial fishing limitations, Kemp’s ridleys have been able to recover to a small extent. Current setbacks to their recovery include beach traffic and development. Development disturbs nesting beaches by introducing things like seawalls and sand renourishment projects that impact the sand on which sea turtles nest. Another consequence of development is beachfront lighting, which attracts young hatchlings away from the moonlit ocean and into roads (3).

Pollution poses another serious threat to Kemp’s ridleys. Sea turtles have a hard time distinguishing plastic bags and other litter from food. When consumed, this litter becomes lodged in their digestive system and, eventually, will lead to death (3). Contaminants such as oil additionally impact Kemp’s ridleys. Following Deepwater Horizon, 600 sea turtles were found dead, 75% of which were Kemp’s ridleys (5). 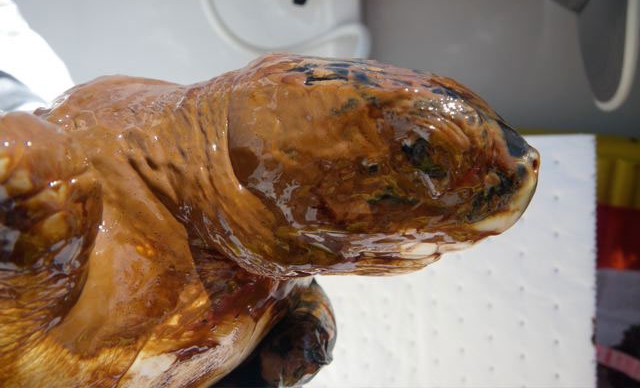 An oiled turtle waits to be cleaned after Deepwater Horizon.

Learn more about how Turtle Island is addressing these threats. Find out How You Can Help Kemp’s ridleys and other endangered marine creatures.