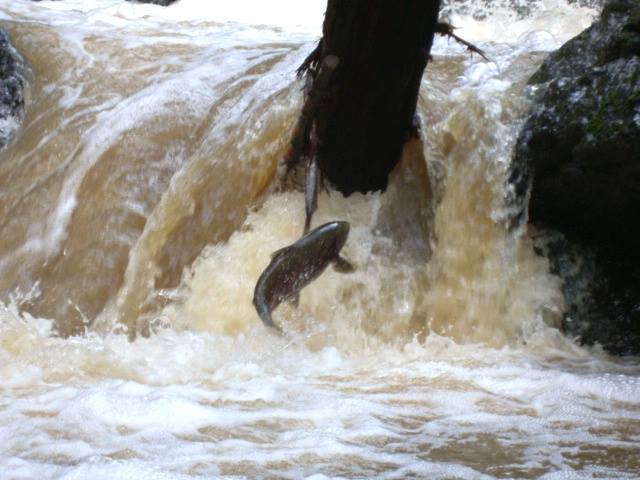 SPAWN, National Park Service, and Marin Municipal Water District (MMWD) are part of the team counting and monitoring the numbers of fish migrating to their natal streams to spawn and lay eggs. SPAWN monitors these fish in the San Geronimo Valley’s small tributaries, specifically Arroyo, El Cerrito, Barranca, Montezuma, Larsen, Willis Evans, Woodacre, and North Fork San Geronimo creeks. Below is our brief overview of the data collected this spawning season in our watershed.

This season a total of 271 coho redds were observed throughout our watershed.

For the first time in recent years, the timing and amount of rainfall allowed our coho salmon to make their way into some of San Geronimo’s smaller tributaries. SPAWN documented a total of 30 coho salmon redds (nests) this season in the San Geronimo tributaries, but they were all in just two of the eight tributaries, with 17 redds recorded in Arroyo Creek, and 13 redds in Woodacre Creek. 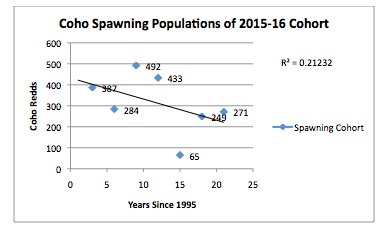 While media reports have stated the run count of 271 is the best in ten years, what may be more biologically relevant is the fact that the spawning numbers for this year-class are below its 311 average.

These fish live and die in a three year period, so there are basically three distinct year-class populations.  If you look at the year-class that spawned this year, and compare it against those 3 years ago, six years ago, nine years ago, etc., it is below average. Scientists do not normally try to draw conclusions about population trends from a single year’s data point.

The stated U.S. National Marine Fisheries Service recovery goal is to bring the runs of these imperiled fish to average 2,600 adult fish each and every year.

In Marin, the species is on the verge of extinction, no matter how the numbers are spun. This year, our creeks and tributaries did provide spawning grounds to a few more fish than last year, but more must be done to ensure these fish not only survive but thrive.