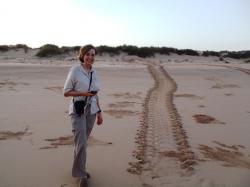 On our first night patrol, we “new” recruits worked our first flatback sea turtle on EcoBeach under the direction of Conservation Volunteers Australia marine species manager Glenn McFarlane and his co-leader Tony. The flatback is smaller and more “feminine” than the big old dinosaur-like loggerheads at Mon Repos on the Queensland coast that I worked with earlier this year. These turtles are truly flatter in the carapace, a light olive grey and the flippers smaller but just as powerful.

With a New Moon, the beach was really dark but the skies spectacular with the Milky Way and the Southern Cross fully bright. The tides have been extreme making it impossible to patrol the north end of the beach at Jack’s Creek. With the wind and tides, it seemed perfect for flatback nesting but last night, our third walking the beach, no turtles were sighted.
Then early this morning at 4:45 am just before sunrise, sea turtle research leader Tony drove us along the beach out to Jack’s creek at low tide to see what was missed. Sure enough on the stretch of beach beyond where we were able to patrol at high tide, we found sea turtle tracks. Most were “false crawls,” meaning the female did not leave any eggs behind. But we did discover one nest in the dunes!

So far this year more than 60 nests have been found and marked. The first nest of the season hatched two nights ago. The night patrol found the tiny tracks and returned a couple of days later to exhume the nest. Almost all eggs had hatched successfully (98 percent).

Flatbacks lay only 50 eggs compared to most other species which generally drop 100 or more eggs into the nest. The flatback eggs are larger in size and perhaps this gives them an edge. The science on this is still not definitive.

Glenn has made a significant finding after only three seasons tagging flatbacks here: It appears that nearly 75 percent of these females nest every year! Nowhere else in the world have so many sea turtles been tagged only to return in subsequent years to nest. One of these flatbacks nested all three years (2008, 2009, 2010). Glenn hopes to present the research to date at the International Sea Turtle Symposium in San Diego in 2011.

Photos by Teri Shore, top to bottom: Teri and sea turtle tracks on EcoBeach, a false crawl with tracks in several directions, and Tony of Conservation Volunteers Australia tagging a nest.