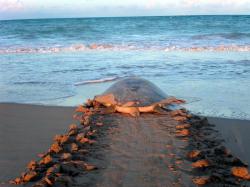 This species of sea turtle gets its name from its flat shell.  Flatbacks are can be found in the tropical areas of the Australia continental shelf, the Indonesian archipelago, Irian Jaya and Papua New Guinea. However, it is known to nest only in Australia on mainland beaches and islands of Queensland, the Northern Territory and Western Australia.

The flatback distinguishes itself by laying eggs nearly as large as the mighty leatherback, producing the biggest, fastest and strongest diving hatchlings of all. Each turtle lays 3 to 5 or more clutches of about 50 eggs each season – about half that of the 100 or more eggs typically laid by other species. The flatback hatchling is also beautiful with dark outlining on its shell and piercing blue eyes. Perhaps one in a thousand or less of those hatchlings will return to its natal beach to nest 25 or 30 years later.