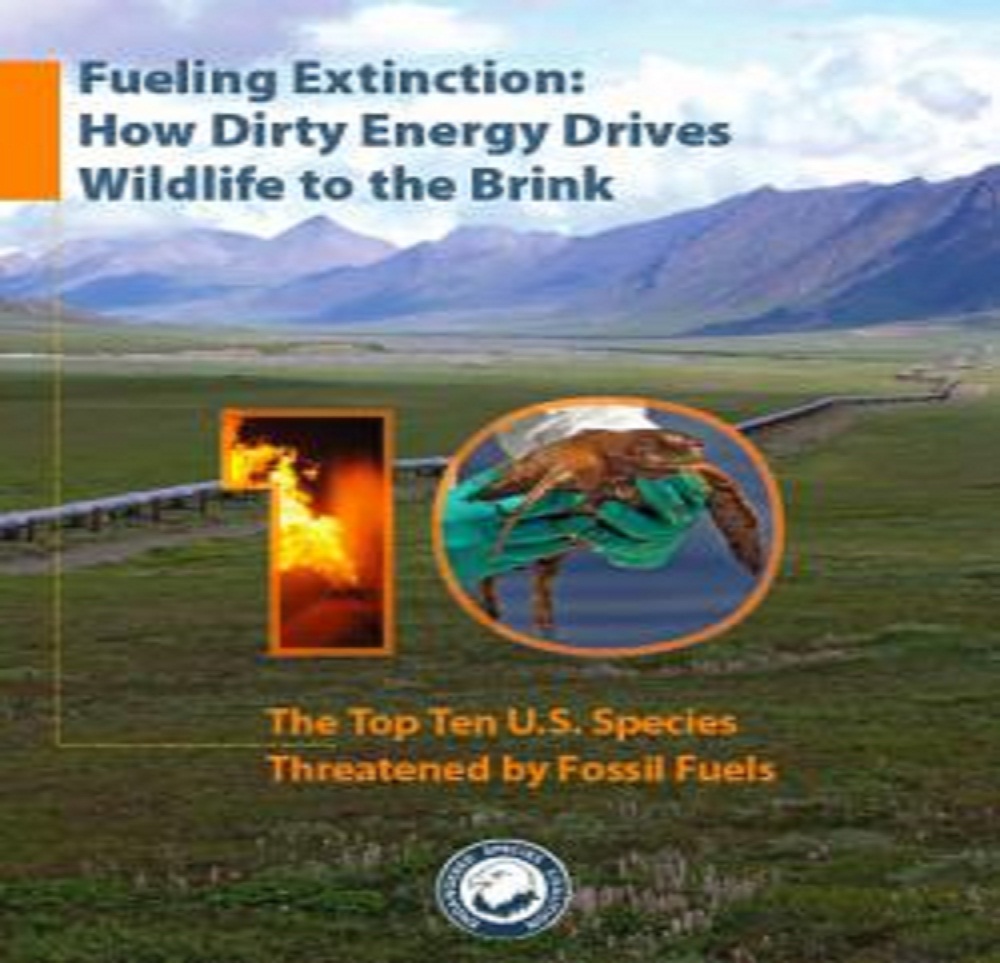 Oil, gas and coal extraction is threatening endangered wildlife in Texas and across the Gulf of Mexico, a new report details. Fueling Extinction: How Dirty Energy Drives Wildlife to the Brink, released today by the Endangered Species Coalition with support from SeaTurtles.org, highlights ten species that are particularly vulnerable to oil, gas and coal. The list spans the entire country, and has special significance in Texas where concentrated fossil fuel activities imperil Kemp’s ridley sea turtles, dunes sagebrush lizards, and whooping cranes.

“America’s addiction to dirty and dangerous fossil fuels is making it much harder to protect the most vulnerable of endangered sea turtles in Texas and the Gulf of Mexico,” said Chris Pincetich, Ph.D. of SeaTurtles.org. “We should not be sacrificing our irreplaceable natural heritage in order to make the fossil fuels industry even wealthier.”

From the Gulf of Mexico to Alaska, the report highlights the ten most endangered animals, plants, birds and fish at risk of extinction due to the pursuit of fossil fuels, and shows how wildlife suffers displacement, loss of habitat and the threat of extinction from the development, storage and transportation of fossil fuels. Coalition members nominated candidates for inclusion in the report, and submissions were then reviewed, judged, and voted on by a panel of scientists. The report identifies the home range, conservation status, remaining population and specific threat facing each of the ten finalists.

The Kemp’s ridley sea turtles covered in oil from last summers’ catastrophic BP spill appear on the cover and are listed first in the report. Texas beaches are the primary nesting area for these endangered sea turtles in the U.S. which spend most of their youth feeding offshore of the Mississippi delta. At least 809 Kemp’s ridleys were harmed by the BP oil spill in 2010 and 609 of those died. The lingering impacts of the Deepwater oil disaster in the Gulf of Mexico are destroying the sole breeding ground of the Kemp’s ridley sea turtle.

“Only a small fraction of sea turtles killed at sea actually are actually discovered,” added Dr. Pincetich “The impacts of the BP oil spill and the ‘business as usual’ oil drilling practices continue to jeopardize endangered sea turtles.”

Other examples of at-risk wildlife include the dwindling population whooping cranes that migrate to Texas and the dunes sagebrush lizard in Texas, where leaking pipelines and high concentrations of toxic gas emitted from oil wells are contributing to the reptile’s decline.

The iconic and endangered whooping crane overcame near extinction in the 1940s, only to face a new battle for survival from the proposed Keystone Pipeline, which would run alongside the crane’s long migratory path, destroying resting places and food sources.

Elsewhere in the country, such as in Appalachia, toxic coal waste is dumped into streams, smothering the threatened Kentucky arrow darter and other fish, as well as poisoning the drinking water supply for downstream communities.

“We are paying a high price for the destruction of Gulf of Mexico and the nation’s land, water, air and wildlife by subsidizing the oil and gas industry,” said Leda Huta, executive director of the Endangered Species Coalition.  “Taxpayers will hand out nearly $100 billion to oil and gas companies in the coming decades. Meanwhile, oil companies paid their senior executives $220 million in 2010 alone, while ExxonMobil, Chevron, Shell, and BP combined have reduced their U.S. workforce by over 11,000 employees in the past six years.”

Fueling Extinction: How Dirty Energy Drives Wildlife to the Brink calls for a commitment to a clean, safe and sustainable energy future, and urges lawmakers to honor the intent of the Endangered Species Act while reducing the country’s dependence on dirty fossil fuels.

For more information go to: http://fuelingextinction.org

Top 10 list of wildlife threatened by development, storage and transportation of fossil fuels

Kemp’s Ridley Sea Turtle: According to U.S. Fish and Wildlife Service, the Kemp’s ridley is the most seriously endangered of all sea turtles, due to lingering impacts of the Deepwater oil disaster on Gulf waters – the sole breeding ground of the turtle. In the immediate aftermath of the oil spill, 609 Kemp’s ridley sea turtle deaths were recorded, a serious set-back to recovery efforts for this species.

Dunes Sagebrush Lizard: The dunes sagebrush lizard is a candidate for listing under the Endangered Species Act due to impacts from oil and gas drilling on the Permian Basin in western Texas. Disturbance from well pads, leaking pipelines, and high concentrations of toxic gas emitted from wells contribute to the decline of the lizard’s population, which exists on a tiny range within the Basin’s vast oil reserves.

Whooping Crane: The endangered whooping crane overcame near extinction in the 1940s, but the existing wild flock of 437 cranes now faces a new battle for survival.  The proposed Keystone Pipeline would run alongside the crane’s entire migratory path from Canada to Texas, and the inevitable toxic waste ponds, collisions and electrocutions from power lines, along with potential oil spills, would decimate the vulnerable remaining population.

Bowhead Whale: The remainder of the endangered bowhead whale population is threatened by contaminants, noise from off shore oil drilling, and deadly collisions with ships. An oil spill could easily wipe out this small population, which lives solely in icy Arctic waters.

Graham’s Penstemon (Flower): This delicate flower lives only on oil shale reserves targeted for mining in Utah. Oil shale mining takes massive amounts of water, putting the flowers at risk of either being starved of water or drowned under new reservoirs. Oil shale soils are very unstable, and any development can bury or uproot the few remaining plants.

Greater Sage-Grouse: Energy development has caused habitat loss and fragmentation due to roads, pipelines, power lines, and human and vehicle-related disturbance, resulting in marked declines in sage-grouse numbers. Coalbed methane gas development in the Powder River Basin of Wyoming has coincided with a 79 percent decline in the greater sage-grouse population.

Kentucky Arrow Darter (fish): Toxic waste pushed into streams from mountaintop coal mining is smothering the rare Kentucky arrow darter fish and poisoning the drinking water of downstream communities.  The arrow darter has already been wiped out from more than half of its range.

Spectacled Eider (Bird): Oil and gas development, along with climate change, have drastically reduced the frigid habitat range of the threatened spectacled eider. As a result, the western Alaskan population dropped by 96 percent between 1957 and 1992. Aircraft and vessel traffic and seismic survey acoustic activities can all negatively impact the bird’s habitat and cause death.

Tan Riffleshell (Mussel): This endangered mollusk plays a critical role in the health of Appalachian river habitats by filtering pollutants and restoring nutrients to the water. Acid mine drainage, sedimentation from coal mining, and coal ash landfills are contaminating the mussel’s habitat and breeding areas, further threatening this most endangered member of the mussel family.

Wyoming Pocket Gopher: It is estimated that fewer than 40 pocket gophers exist today in their sole range in Wyoming’s Sweetwater and Carbon Counties. Truck and vehicle traffic associated with increasing oil and gas activities result in habitat loss and fragmentation, cutting off potential mating opportunities and endangering the survival of this rare animal.

Advocates Choice – The Polar Bear: The polar bears’ survival is completely dependent upon sea ice, which is rapidly melting. They are further threatened by the risk of an oil spill, and activities like seismic testing, icebreaking, and vessel movement also negatively impact polar bears and their food sources.