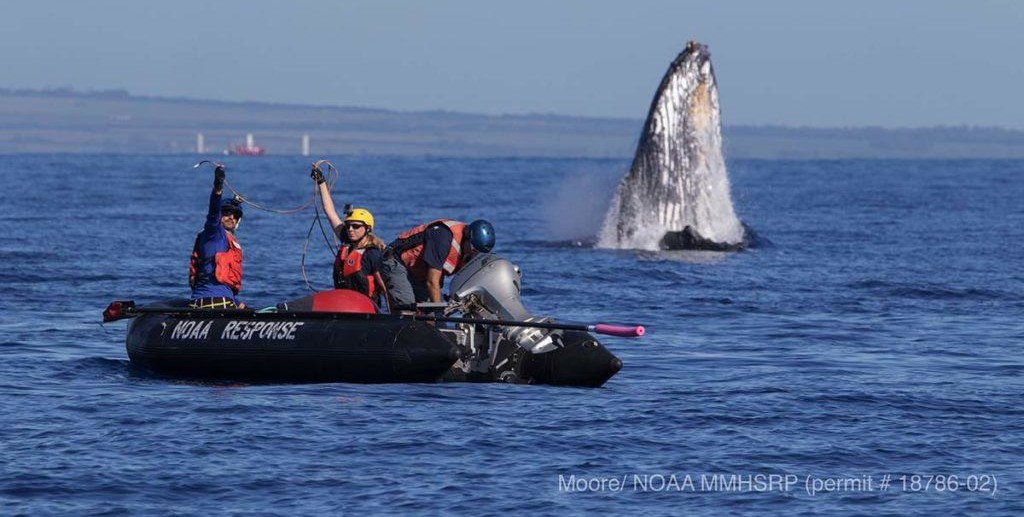 This multi-agency collaboration is authorized under NOAA Fisheries’ Marine Mammal Health and Stranding Response Program which oversees the response efforts.  While Hawaiian humpback whales have recovered enough to be taken off the Endangered Species List, they are protected under the Marine Mammal Protection Act, as threats still exist.  Because of the whales’ status, and the risks involved for animal and humans alike in trying to help them, the response effort is a federally permitted activity.

The ocean is a big place. It spans our globe, connects lands and people, and is the only home for countless marine species. It reaches depths we’ll never fathom in our lifetime and creatures we can only dream of. The species we have discovered, pushed to the brink of extinction, then steadily coaxed back to life are still suffering from our actions. The smallest animals to the largest animals, like the humpback whale, navigate these waters much like they did when they first came into existence.

Today there are at least 80,000 humpback whales in the wild.Fishing gear consists of fishing line, hooks, nets, line/ropes, buoys, and traps.  Most fishers are not trying to catch a whale, and we all need to work together to find solutions to prevent these occurrences. Other types of marine debris can also pose a threat to ocean animals.  According to NOAA, it has been estimated that over 300,000 cetaceans die each year worldwide as a result of entanglements. 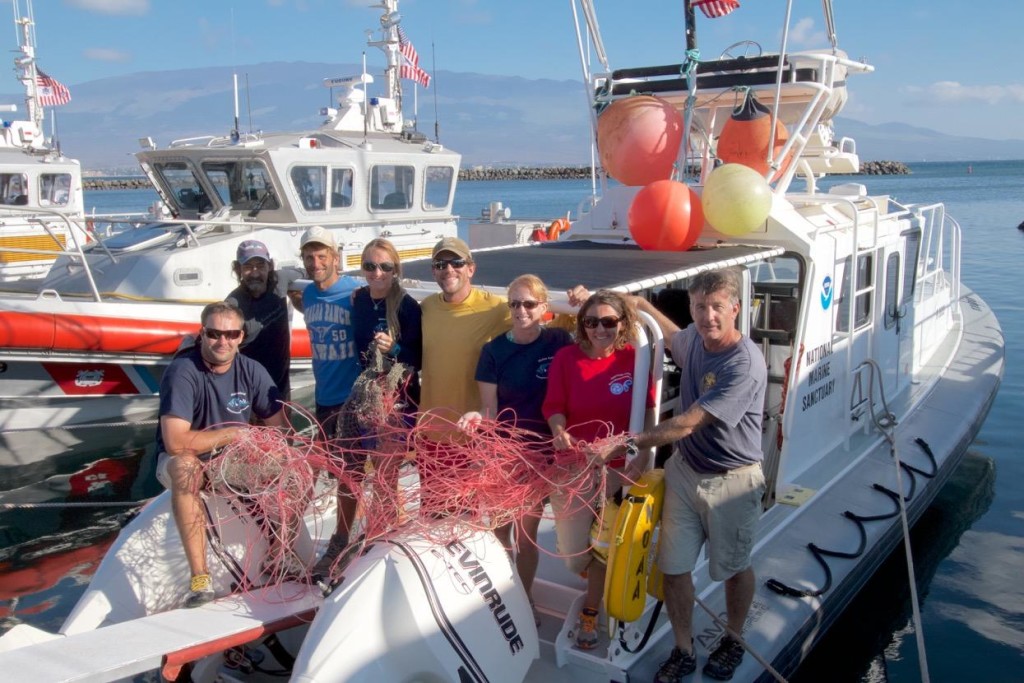 The first objective is to find the whale, and the second is to not lose the whale.

Our Hawai`i Program Director, Cheryl King, has been an active member of NOAA’s Large Whale Entanglement Response Team since 2008.  Led by the Hawaiian Islands Humpback Whale National Marine Sanctuary’s Ed Lyman, the team consists of other NOAA employees, state employees, the Coast Guard, ocean conservationists and researchers, tour boat operators, etc.  Team members go through annual classroom and on-water training sessions, amidst busy lives, and couldn’t be prouder to be involved.  In the past month, Cheryl has been a part of three rescue cases off of Maui Nui. Here’s her perspective:

How do we find out about whale entanglement in the first place?  We rely on timely reports by members of the public, researchers, fishers, whale watching boats, helicopter companies, and the list goes on… They all play that crucial role, but should never attempt to free the whale themselves.  The whales are big needles in a vast North Pacific Ocean haystack so we need their assistance to find them.

Mariners are asked to keep a sharp lookout for entangled animals, but not to approach closely or attempt to free them. While well-intentioned, freeing a 40-ton animal is extremely dangerous for the animal and the would-be rescuer. Getting in the water is especially dangerous. People have been killed. As a result, only trained and well-equipped responders that are authorized under NOAA Fisheries’ Marine Mammal Health and Stranding Response Program are permitted to disentangle whales. If you sight any marine mammal in distress, maintain 100 yards distance and please call the NOAA Fisheries’ 24/7 response Hotline at  1 888 256-9840.   If unable to call, please radio the U.S. Coast Guard on VHF CH. 16, and they will relay the report.

Once an entanglement call is received and verified, Ed contacts the team.  In my case, I drop everything , grab my  “GO!” bag and race to the Ma`alaea boat harbor.  My GO! bag contains my Keens, helmet, gloves, lifejacket, snacks, water, foul weather gear, and sun protection.  We never know how long we’ll be on the mission, but it’s usually many hours.

When everyone arrives, usually about 8 people, Ed goes over the details of what is known about the entanglement and we discuss our initial plan.  Safety is our #1 concern.

When we depart the harbor and head towards the whale’s location we’re busy prepping iPads and cameras, checking the VHF/satellite transmitter and attaching it to a custom “Leave On Whale” buoy, testing radios, preparing rescue gear, and communicating with our support team on land. 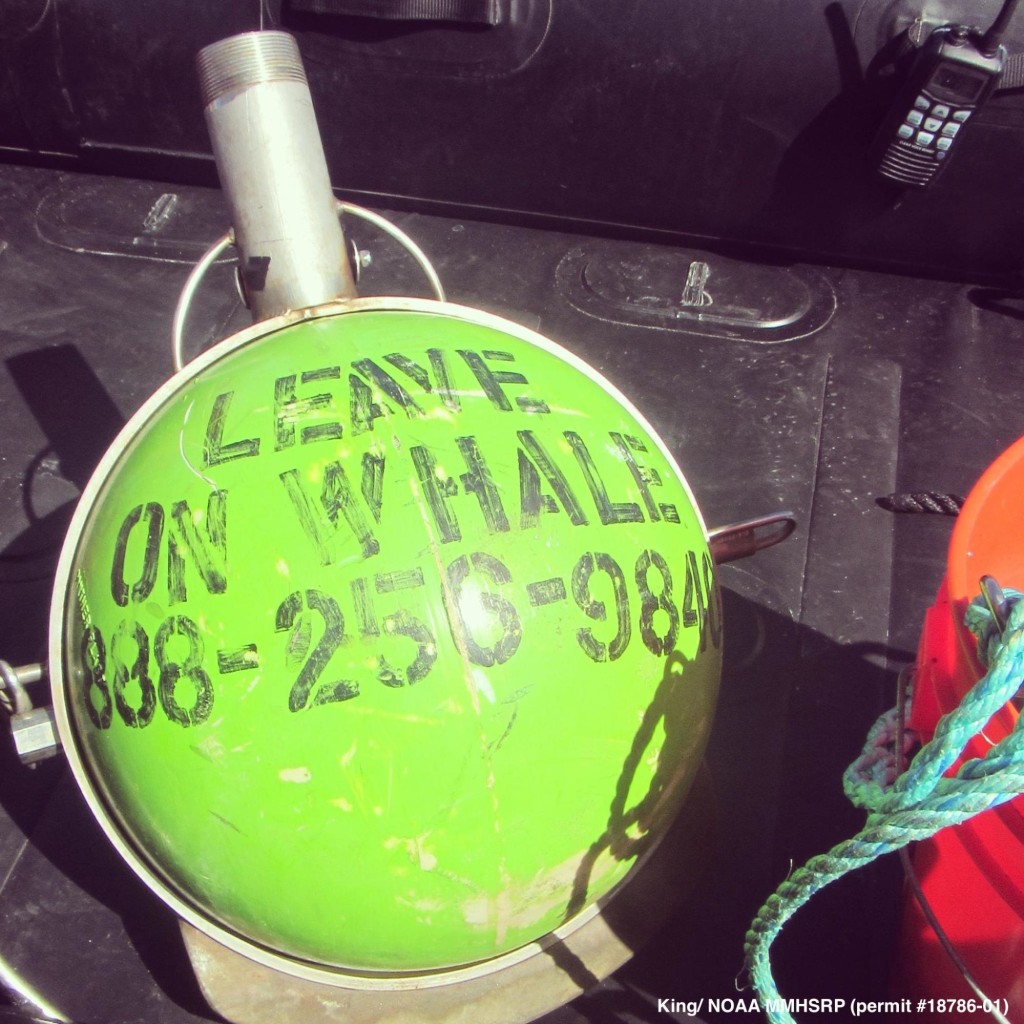 The first objective is to find the whale, and the second is to not lose the whale.

Ideally, the initial spotter who called in the report will stay with the whale, while maintaining the federal and state mandated 100-yard approach limit, until we arrive.  Our tour boat community often works well together to “hand off” our whale to another company if the initial tour group has to leave.  Since whales can easily be lost in the whale soup of our Maui Nui waters, we are always grateful for these efforts.

Once we arrive, our initial assessments of the animal are made with as few approaches as possible to not startle it.  We’ve all learned a lot about whale behavior and the techniques to assess the entanglement have evolved with the advent of new technology like GoPros, Google glasses and drones.  This is the most crucial part of our mission: making a solid assessment of the extent of the entanglement so we know what tools/techniques to use to cut the right lines that will totally free the whale.  Once our plan is established and roles are assigned on all vessels involved, we put our plan into action (knowing all too well that things can change at a moment’s notice). 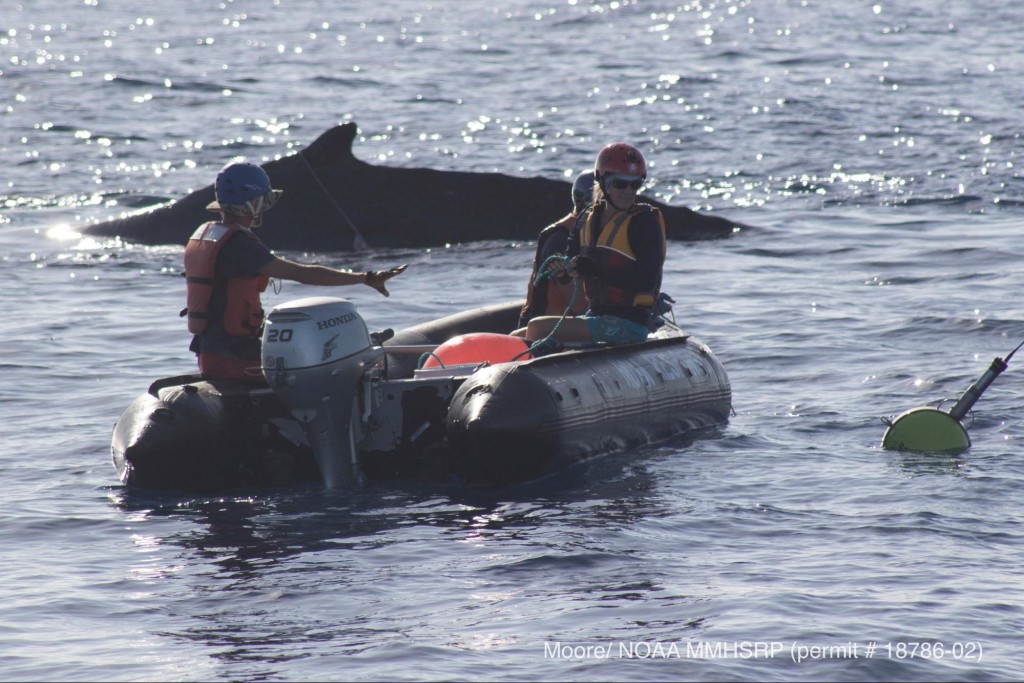 First: get a hold of the line.

This is relatively simple if there are any buoys attached to a floating, trailing line, but more difficult if we have to fish the line up.  There are a lot of factors that determine how easily we can  reach the whale (or not): swimming speed, surface interval and depth plus the length and type of line and anything that’s attached to it. We often use a throwing grapple to hook into the trailing line.  Once attached, the “Nantucket sleigh ride” begins and your grip strength is tested until the attached buoy is thrown overboard.

Second: slow the whale down.

We usually have to slow the whale down to cut the line free. This is done by gradually adding different sized poly balls or sea anchors to our working line.  This is often when we attach the transmitter buoy so we can track it if we have to abandon the day’s efforts due to ocean conditions or darkness.  In the unfortunate event that we lose the animal completely, we make each attachment with a custom carabiner with a link that will dissolve and release after ~10 days.  That means that we’re not adding to the long-term gear load on the animal.

Our toolkits contain an assortment of knives with various custom blades set at different angles for different purposes; all of which are built to be quickly assembled onto long carbon fiber poles (~2” wide).  More poles are added as the distance needed to reach the entanglement gets longer.  Maneuvering a knife at the end of the poles balanced on the bow of the inflatable boat at the right orientation towards the moving line precisely where it needs to be cut, while bouncing over waves following a free-swimming whale we don’t want to spook, is without a doubt the most difficult thing I’ve ever tried to do.  I’ll keep practicing during our training sessions with whale tail replicas and buoys (pictured below), but I’ll likely always be leaving that tough task up to team members who have more leverage.  I’m just too short! 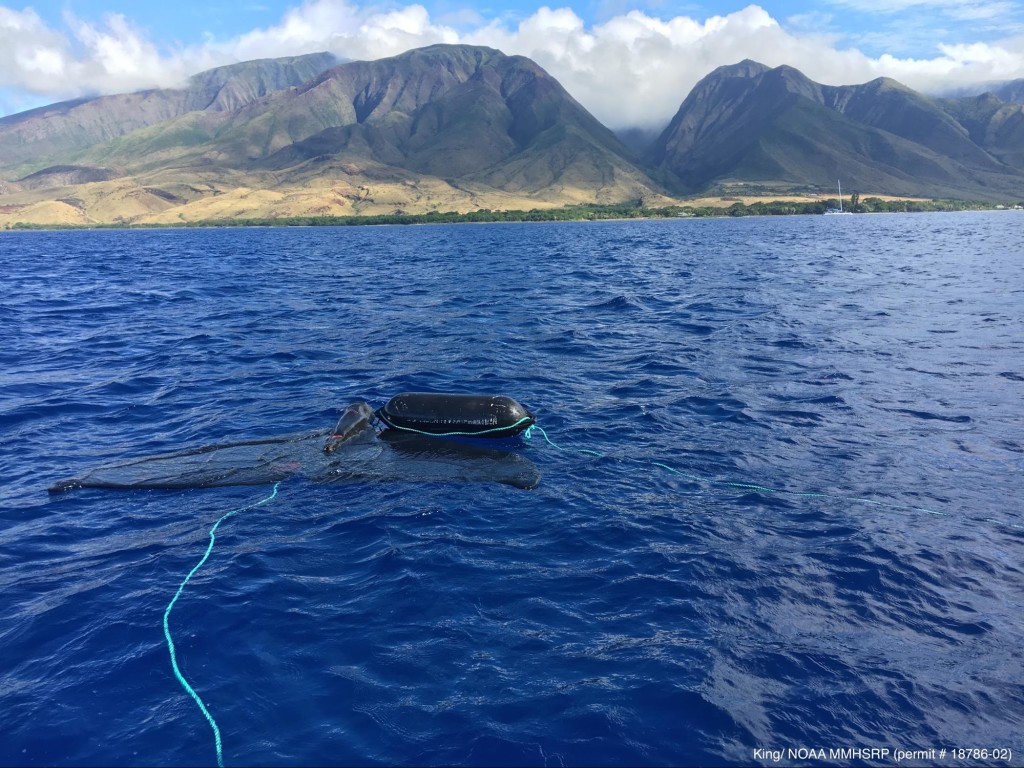 Every case is different depending on ocean conditions, the type and amount of gear involved plus the location and extent of the entanglement: is the gear wrapped around the body, coming from the mouth, or wrapped around the pectoral fins, peduncle or fluke?  The whale’s health and reactions to our presence dictate our operations, and other whales who enter the scene add a large (40-50 foot) unknown component.  These whales are wild animals who are already stressed by the gear, and they all act differently so everything is very unpredictable.  Our actions have to be well-calculated, yet flexible for on-the-fly reactions at a moment’s notice.

It’s always extremely exhilarating to cut a whale loose, and we have many successes to show for our team’s efforts.  The “ones that got away” are fewer, but still deeply etched in my memory.  This is an ongoing problem (for countless other species too), with no end in sight since the amount of marine debris and fishing activities in our oceans are only increasing.  There are a growing number of groups similar to ours around the world, but we still don’t even find out about the overwhelming majority of the cases, so imagine how many more entangled animals are out there!  Prevention is the key, and we’re learning more and more about the types of gear that entangle whales with every incident.

Although it was made back in 2010 and we’ve evolved since then, the film “In the Wake of Giants” does an excellent job of showcasing this project: https://hawaiihumpbackwhale.noaa.gov/res/entanglement.html