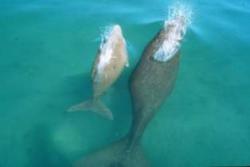 Dugongs in the GBR and Gladstone Harbor

Dugongs are listed as endangered under the U.S. Endangered Species Act. The World Conservation Union (IUCN) has listed dugongs as vulnerable to extinction on a global scale because the numbers of dugongs worldwide appear to have declined by at least 20 percent over the last 90 years (about three dugong generations). Populations of dugongs in the GBR have declined for decades, with only a few hundred remaining in the Gladstone region.  Vessel strikes are a key threat to dugongs, which are slow moving and tend to utilize shallow, inshore waters.

In Australia, dugongs range throughout the Great Barrier Reef where numerous Dugong Protected Areas (DPA) have been designated. (Dugong photo at left by Colin Limpus).

The DPAs help to ensure that seagrass beds that they rely on remain healthy and accessible in the long term. Regulations on fishing and vessel speeds are also imposed in the DPAs. The Rodd’s Bay DPA located just south of Gladstone and Curtis Island contains significant seagrass meadows. It is a critical site for dugongs because it lies between two other important seagrass feeding areas in Shoalwater and Hervey Bays along the Queensland coast.  As such, the Gladstone region likely represents an important connecting habitat between dugong populations in southern Queensland.  The loss of seagrass beds in the region due to dredging and contamination is a major conservation concern.

Gladstone is considered a dugong stranding “hot spot” where an unprecedented 22 individual animals were found dead in or near the harbor over the past two years. While many of these deaths were attributed to natural events that reduced the size and health of seagrass beds in the area, the population is at risk from dredging and boat strikes as well as indirect impacts such as loss of habitat and disturbance. In particular, “although floods and other extreme weather events have been documented to occur previously, their effects on seagrass habitats may have been exacerbated in recent times by land-use and poor catchment management.”

Australian snubfin dolphins in the GBRWHA and Gladstone Harbor

The Australian snubfin dolphin was identified as a separate species only in 2005. It was the first new dolphin species to be discovered anywhere in 56 years. The snubfin’s population size and status is not fully known, but researchers estimate a total population of less 1,000 total animals in Australia and as few as 100 adult snubfin dolphins in all of Queensland.

There is enough evidence to suspect the species has declined by more than 30 percent over the last three generations. In the Fitroy Delta, the small population of an estimated 84 snubfin dolphins is considered to be geographically and demographically isolated from any other. It is one of only two cetacean species resident in the Fitzroy-Gladstone region, the other being the Indo Pacific humpback dolphin. Researchers have already documented local snubfin population declines after a large flood and the concurrent expansion of the Curtis Island port facilities in 2011. The long-term survival of this small and isolated snubfin population is directly threatened by increased industrial development.

Seagrass meadows in the GBWRHA and Gladstone Harbor
Healthy seagrass meadows provide the primary food source for endangered dugongs as well as green sea turtles. Therefore, loss of seagrass meadows directly impacts the viability of dugong and green sea turtle populations in the GBRWHA. The dumping of dredge spoils or other fill material can degrade or remove seagrass beds. As much as 99 percent of seagrass is dead in the turbid inner Gladstone Harbor due to dredging and toxicity. The high turbidity has contributed to the seagrass’s inability to recover during the growth season and continues in conjunction with the floods in 2011 and 2013 smother the grass to impede its regrowth.

Dumping of Dredge Spoils into the GBRWHA

Related to the concerns about seagrass beds, we would like to point out that more than 27 million cubic meters of dredge spoils was legally dumped into the waters of the GBRWHA over the past 12 years by ports in Queensland. Permit applications for another 25 million cubic meters of dredge spoils are now pending. New and continued sea dumping of dredge materials in the GBRWHA is a major concern as it threatens the integrity of the entire marine ecosystem.

A recent report on dredging and dumping in the GBR makes these troubling findings:

“Contrary to expectations, the modelling of the Region indicates that placement of material in deeper water further offshore in the Reef lagoon than the currently used placement sites would not necessarily result in reduced migration of dredge material. In fact, the modeling incorporating large-scale currents generally predicts that material placed offshore may if anything be more mobile than if placed in the current sites closer to shore.

The current study’s predictions of dredge material migration on large spatial and temporal scales point to a number of key knowledge gaps and research areas in relation to developing improved management strategies for dredge material in the Region.”

Clearly, the impacts of dredge spoil dumping in the GBWHA need to be re-assessed and prevented; and perhaps halted until such time as the long-term effects are understood.