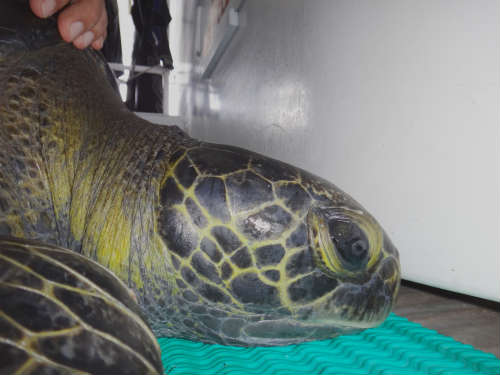 Olema, Calif (June 19, 2014) – Sanjay, a 53 kilogram (117 pounds) male endangered green sea turtle (Chelonia mydas agassizii), made history on Monday, June 16 when he completed his 14-day migration from the Cocos Island Marine National Park in Costa Rica to the Galapagos Marine Reserve in Ecuador. Sanjay is the first turtle to directly link these two protected marine areas, proving the connectivity of the Eastern Tropical Pacific as well as the importance of protecting migration routes.

“It’s truly remarkable. Sanjay knew where he was headed, and made a beeline from one marine protected area to the next,” said Alex Hearn, conservation science director for Turtle Island Restoration Network. He added, “These protected areas of ocean are hot spots for endangered green sea turtles, but we also need to think about their migratory corridors between protected areas.”

Sanjay was one of three green sea turtles tagged at Cocos Island, Costa Rica in June during Turtle Island Restoration Network and PRETOMA’s joint 10-day research expedition. The expedition set out to understand where these endangered sea turtles migrate and how they use marine protected areas. Since 2009, the two organizations have tagged over 100 turtles, yet Sanjay is the first to have been documented moving between these two marine protected areas. Sanjay was tagged with a satellite transmitters and his migration track can be seen in the map below: 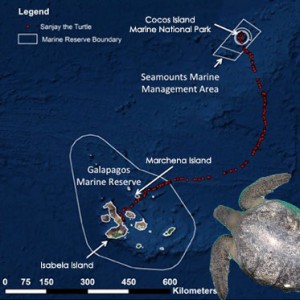 “Finally seeing a turtle move from Cocos Island directly to Galapagos is absolutely amazing,” said Maike Heidemeyer from PRETOMA. “Especially because preliminary genetic research results suggests that there is a connection between green turtles at Cocos Island and the Galapagos.”

Green sea turtles, like Sanjay, play an important role in the Eastern Tropical Pacific ecosystem. Little is known about the geographic distribution of juvenile and male turtles like Sanjay. However, nesting sites for female turtles have been identified in the Galapagos, mainland Mexico and Revillagigedo Islands, as well in the Northern Pacific of Costa Rica. At Cocos Island, two different populations of turtles occur: the black-to gray colored Eastern Pacific green turtles (also known as “black turtles”) and Western Pacific populations. Both populations are considered as subspecies by some authors, but there is no official taxonomic division.

“The route that Sanjay the green turtle followed is riddled with longline fishing gear,” said Randall Arauz of PRETOMA.  “Several international initiatives exist to improve marine conservation in the Eastern Tropical Pacific, and its time for these initiative to translate into direct actions that ultimately protect these turtles from unsustainable fishing practices.”

The purpose of the research program is to understand how endangered turtles and sharks use the Cocos Island and Galapagos National Parks marine protected areas, and to see if there is biological connectivity between those new sanctuaries.  Sanjay the turtle joins several hammerhead sharks, a silky shark and a Galapagos shark that have spent time at both of these reserves.

“These species are protected while they are in the reserves, but as soon as they swim beyond the no-fishing zone, they are being hammered by industrial fishing vessels that set millions of hooks in the region,” said Todd Steiner, executive director of Turtle Island, biologist and co-primary investigator of the Cocos research program. “Our goal is collect the necessary scientific data to understand the migratory routes and advocate for ‘protected swimways’ to protect these endangered species throughout their migration,” he added.

Satellite, acoustic and genetic information is currently being analyzed and will be officially published later in the year. Information obtained from satellite tags is crucial for interpreting sea turtle movements and to connect habitats occupied during different life stages to effectively design regional conservation measures. But quality data comes with a high cost – each satellite tag cost around $4,000 and has a high probability of malfunctioning because of the rough ocean conditions the turtles move through. Turtle Island and PRETOMA’s expeditions to Cocos Island are financed by individual’s generous support of ocean conservation. Without the help of Sanjay, the human supporter the turtle was named for, and all other expedition members, such important information for regional conservation wouldn’t exist. Sea turtle Sanjay is on the move again, the latest ping suggests that he is headed to green sea turtle nesting grounds at Isabela Island.

Pictures and videos of Sanjay, and a map of the migration route are available to the media via dropbox. Click here to access.

Turtle Island Restoration Network works to mobilize people and communities around the world to protect marine wildlife, the oceans and the inland waterways that sustain them.