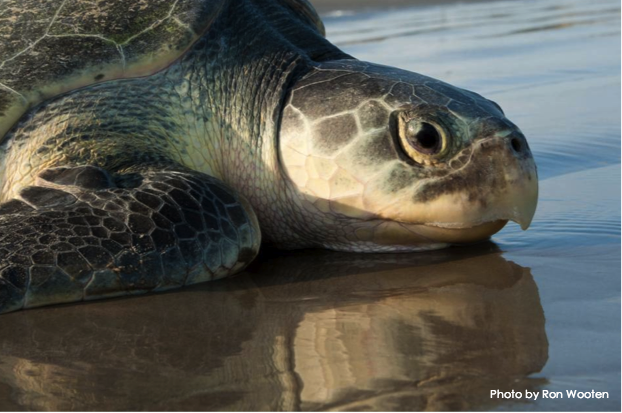 GALVESTON – When a nest laid by an endangered Kemp’s ridley sea turtle was found in a pile of seaweed on Surfside Beach last week, it confirmed Kimberly Reich’s worst fears.

As seaweed continues to pile up on Texas Gulf Coast beaches due to an unusually large influx of the marine algae since April, Reich is among a number of scientists and turtle advocates who worry that nests laid by the state sea turtle are being buried or crushed by heavy equipment that’s being used to remove the sargassum.

They are also concerned that endangered green turtles being washed ashore with the seaweed are suffering the same fate.

Despite extraordinary efforts to avoid harming the turtles, the volume of seaweed may be so great in places that it’s too difficult to spot turtles or turtle nests, said Reich, director of the Sea Turtle Research Lab at Texas A&M University at Galveston.

The seaweed onslaught is coinciding with the nesting season for the Kemp’s ridley, said Reich and Joanie Steinhaus, Galveston representative of the Sea Turtle Restoration Project.

“We’ve had a lot of strandings and unfortunately with the (beach) cleaning the impact is tremendous,” Steinhaus said.

Since May 10, the National Marine Fisheries Service, which keeps track of turtles washed ashore, has found 20 live and 23 dead green turtles on the beach among the sargassum, said Andy Krauss, research assistant at the service’s Galveston office. Krauss said he knows of at least one green turtle that was caught in a front end loader, but crawled away unharmed. He knows of no turtle deaths caused by cleaning equipment but believes it’s a reasonable concern.

Protection efforts are complicated by the fact that private contractors handle beach cleaning along parts of the shore.

The Galveston Park Board has asked for assistance from the U.S. Fish and Wildlife Service, which has responsibility for turtles after they reach land, and the U.S. Army Corps of Engineers, which has enforcement authority. In an email response, Alicia Rea, project manager for the Compliance Branch for the Corps’ Galveston District, said, “The district is working with federal and non-federal partners to evaluate the conditions and identify a way forward that would enable the removal or repositioning of the seaweed while minimizing risks to the environment and habitat in accordance with federal laws.”

Juvenile green turtles, with shells ranging from about 6 inches to 1 foot in diameter, typically live among rafts of sargassum that drift through the Gulf of Mexico. Only a few tend to drift ashore with seaweed each year, Krauss said, but this year the seaweed is carrying an unusually high number of green turtles with it onto the beach.

“We do have a lot more live greens and dead greens than normal, but we’ve had a lot fewer ridleys than (in) other years,” Strauss said.

The seaweed and its removal are making it harder to protect Kemp’s ridleys, Steinhaus said. After funding for turtle patrols dried up this year, Steinhaus organized volunteers to patrol the beaches daily for Kemp’s ridley turtle nests so the eggs could be collected and sent for incubation to the Padre Island National Seashore. Steinhaus said volunteers complain that beach cleaning machinery may be covering up the telltale turtle tracks that lead to nests. Steinhaus and Reich also worry that heavy machinery may be covering up turtle nests or even crushing them.

As the nearly six-month-long nesting season draws to a close, only three turtle nests have been found so far this year, compared with 17 last year.

Concerns that nests were being buried by seaweed seemed to be confirmed when a nest was found in an area where the city of Surfside Beach had dumped seaweed, Reich said. “If visitors had not seen her and we had not gotten her nest out of the sargassum piles, it’s a strong possibility that the sargassum would have been dumped there in the future,” she said.

Kemp’s ridleys are smaller and lighter than other turtles, with an adult having a shell that’s about 2 feet in diameter, and they can easily crawl across seaweed unless they run into one of the current walls of seaweed, some of which rise several feet, Reich said. If they fail to find a nesting spot after two or three attempts, they will dump their eggs at sea, she said. Turtle advocates said the number of nests discovered so far this year is fewer than at the same time last year all along the Texas Coast and at the main nesting ground in the state of Tamaulipas, Mexico. Scientists are hoping for a late nesting surge.

Until last month, beach cleaning permits issued by the city of Galveston required that trained turtle watchers be used during seaweed removal, said Rick Vasquez, Galveston planning director. Vasquez said the city recently dropped the requirement because there are no certified turtle monitors.

Texas A&M Galveston offers training but not certification. Instead, permit holders sign a sworn statement promising to adhere to a set of best seaweed removal practices developed by the Park Board.

Nevertheless, the Park Board has hired six trained turtle monitors to walk in front of beach cleaning machinery when operating to ensure the safety of turtles and nests, Park Board Director Kelly De Schaun said.

“They are making an effort, but I don’t think it’s enough of an effort,” she said.

De Schaun said that Park Board personnel are trained to spot turtle nests and that every effort is being made to protect them. But the Park Board is only responsible for the beaches in front of the seawall and city-owned or maintained beaches. Private contractors clean the beaches in front of private property on large portions of Galveston Island.

The largest operator on Galveston island, Hernan Botero, owner of Great Expectations beach cleaning service, said he and his wife are trained turtle monitors and that he goes ahead of the cleaning equipment on an all-terrain vehicle to look for turtles and nests. He said he uses environmentally friendly seaweed rakes pulled by a tractor. “If you are running my machine with a tractor you have a perfect view in front of you and all around you so if you spot a turtle you can definitely avoid hitting it,” Botero said.

Read online at the Houston Chronicle. Click to see photos of the extensive the sargassum covering the beach.