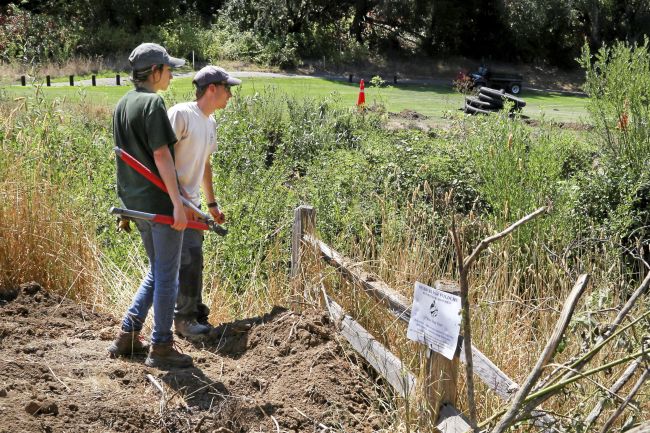 With the local salmon listed under the Endangered Species Act, environmentalists say the best place to focus recovery efforts is in the area that has the largest endangered population.

“The largest population of Central California coast coho salmon is right here,” said watershed biologist Preston Brown. “For recovery to happen, it has to start here.”

As part of that effort, the Salmon Protection and Watershed Network is restoring a section of Larsen Creek that passes through San Geronimo Golf Course, addressing erosion issues that can degrade habitat important to local salmon and steelhead trout populations.

Work began this week on a 200-foot stretch near the course’s 11th hole, and is expected to be completed by Friday, though landscaping the revamped earth will be done in the fall.

“They have a (golf) tournament here on Saturday, so we’re moving pretty fast,” said Brown, who is overseeing the project.

The National Oceanic and Atmospheric Administration identifies seven distinct coho salmon populations in the waters in California, Oregon and Washington. The Central California coast population is the only endangered group, while three Oregon populations are considered threatened.

Jennifer Kim, the golf course’s executive director, said the Watershed Network approached course officials about the doing the restoration. Being that it fits in with efforts to make the course more environmentally sustainable, the proposal was embraced.

“It’s something we want to do to be better stewards of this land, because we have a larger footprint than other businesses or homes in the area,” Kim said. “So we want to do our part to make as little of a negative impact as possible.”

Before crew members began moving dirt, they gathered fish, frogs and newts living in the area and relocated the creatures down stream. A professional birder, who surveyed the area to make sure no nesting birds would be disturbed, identified 24 bird species at the site.

The creek serves as the depository for a 366-acre watershed, Brown said. For an area that size, creeks are typically 8 to 10 feet wide at the high water point. But this stretch of Larsen is only about 3 to 4 feet wide. When it rains and runoff fills the creek, the narrower passage makes for a rougher environment.

“It concentrates the flow and makes for difficult fish passage,” Brown said. When fish are trying to swim down it or up it, the water is moving at an unnaturally high velocity.”

On the upstream side of the bridge that leads to the course’s 11th hole, an embankment with a near-vertical face created an unfavorable runoff pattern. So dirt was removed this week to form a more gradual slope, reducing the waterfall effect that was facilitating erosion and a buildup of sediment in the creek bed.

“We just want (the runoff) to flow differently, to slow it and spread it,” Brown said.

Later this week, coir matting — made up of coconut and Aspen tree fibers and straw — will be placed over the newly shaped slope, to reinforce the soil.

On the downstream side of the bridge, redwood stumps are being placed in the creek bed to “deflect flow of water away from the bank,” Brown said, “at the same time providing refuge and a pool habitat for coho and steelhead.”

One-ton boulders are being placed in the creek bed to keep the stumps in place.

The Watershed Network works mostly with private property owners, often approaching them with proposals to restore waterways that go through or by properties, Brown said. Funding is solicited from outside sources, so the restorations are done free of cost to the property owners.

Kim said the restoration project is part of an ongoing effort to reduce the course’s environmental impacts.

She said course officials are considering installing solar panels to produce electricity and are looking into a way to use reclaimed water to keep the grass green. And an environmental study was recently completed to help course officials figure out other ways to make the course more sustainable, Kim said.