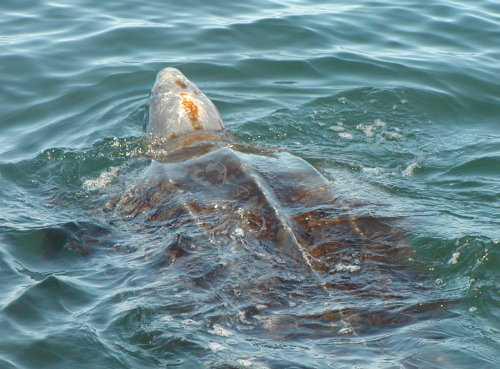 Rare leatherbacks spotted by network of activists organized by SeaTurtles.org

In an effort to enhance recovery prospects for the critically endangered Pacific Leatherback sea turtle, Turtle Island Restoration Network (SeaTurtles.org) today announced the final 2011 “citizen scientist” research voyage of its all-volunteer Leatherback Watch Program.  The program tracks sightings of leatherbacks off the northern California coast, coordinating with recreational sailors, whale watchers, and scientists.  The region is an essential feeding area for leatherbacks that swim across the entire Pacific Ocean from nesting beaches to reach the abundant jellyfish blooms that occur each summer in the California Current marine ecosystem. The Leatherback Watch Program recorded over twenty sightings in 2011.  The research expedition, leaving from San Francisco and traveling beyond the continental shelf in the Gulf of the Farallones National Marine Sanctuary is scheduled for October 23 and is open to the public.

“Seeing a critically endangered leatherback is a rare and unforgettable experience and compiling these sightings is really boosting our local conservation and advocacy outreach,” said Chris Pincetich, Ph.D. a marine biologist and campaigner for www.seaturtles.org. “Knowing exactly when they arrive, where they are most abundant, and how many are out there helps us shape new protected areas free from industrial fisheries that are their leading threat.”

The Leatherback Watch Program began in 2010 to work collaboratively with charter vessels, marine researchers and local yacht clubs to compile, record and communicate sightings of Pacific leatherbacks off the West Coast of the United States using photos and GPS coordinates to validate the data for use in ongoing marine ecology studies.

“The best way to monitor a species is to collaborate with others and create a network,” said Kate Cummings from Blue Ocean Whale Watch based in Moss Landing.  “The Leatherback Watch Program is doing just that: getting the public involved to better understand the movements and habits of the endangered leatherback turtles to aide in conservation.”

“Seeing this rare sea turtle was the highlight of our day and taking part in the voluntary Leatherback Watch Program transformed our lucky sighting into another data point in the ongoing conservation work of the Sea Turtle Restoration Project” said captain Larry Twomey, calling from his yacht offshore of Monterey.

With the help of citizen scientists like Larry, the Leatherback Watch Program has recorded sightings from Point Sur California up to British Columbia, Canada. Visitors onboard with the Blue Ocean Whale Watching in the Monterey Bay National Marine Sanctuary and the Oceanic Society in the Gulf of the Farallones National Marine Sanctuary have scored the most sightings this summer.  The majority of sightings were off the California coast in an area slated to be designated as protected critical habitat under the Endangered Species Act for these marine reptiles on November 15, 2011.

“The unfortunate fact is that we have few remaining Leatherbacks in the Pacific Ocean,” said Marc Ward of Sea Turtles Forever who shared the majority of sightings from Oregon and Washington.  “They are hanging by a thread as far as overall numbers in the Pacific.”

Leatherbacks grow up to eight feet long, can weight close to a ton, have survived the extinction of dinosaurs over 65 million years ago virtually unchanged, but are now under a serious threat of extinction in the Pacific. Populations of the Pacific leatherback have declined by approximately 90 percent in the last 25 years under the constant assault of industrial fishing, particularly the deadly interactions with longline and gillnet fishing gear. Illegal poaching, vessel strikes, entanglement in marine debris, and plastic pollution ingestion all harm and kill these imperiled animals. For over twenty years, the Sea Turtle Restoration Project www.seaturtles.org has worked from California and the Gulf of Mexico with communities across the globe to protect endangered leatherback sea turtles from slipping closer to extinction.

“It is always so nice to hear from participants of the Leatherback Watch Program who are willing to spend time out of their day to give us information, and who are willing to share their photos and videos with us, too,” said Ming Ong, intern with www.seaturtles.org in charge of outreach to the Leatherback Watch Program partners.