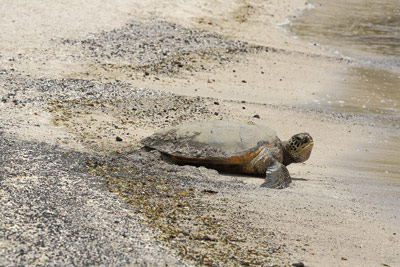 Honolulu, Hawaii (Oct. 16, 2014) – An estimated eight sea turtles, including four critically endangered Leatherback sea turtles were killed, and eight false killer whales were injured in the last three months by the Hawaii tuna longline fishery, according the National Marine Fisheries Service  newest report (.pdf). An estimated 28 black-footed albatross also were killed. These high numbers of marine deaths were reported despite restrictions placed on the fishery in attempt to reduce the impact on these protected species.

The Hawaiian tuna longline fishery is required to place observers on approximately 25 percent of fishing vessels, so the estimated death toll numbers are based on the assumption that unobserved vessels injured or killed similar number of protected wildlife as those vessels with observers.

“Drowning and injuring this many turtles, whales and seabirds month after month is unacceptable,” said Todd Steiner, biologist and executive director of Turtle Island Restoration Network, one of the organizations that has been involved in working to reduce wildlife deaths in this fishery for more than a decade.

Through a series of actions including lawsuits and settlements beginning in 1999, Turtle Island (along with local Hawaiian organizations and other national environmental groups) have watched-dogged the Hawaiian longline tuna and swordfish fisheries resulting in regulations to limit the collateral damage to sea turtles, marine mammals and seabirds harmed by this fishery. Turtle Island and partners worked to implement temporary closures of the fisheries, caps on number of turtles killed or injured, yearly time-area closures, and modifications of fishing gear.

“If the fishery can not do a better job of reducing harm to sea turtles and whales, we will push for new limitations on fishing effort,” Steiner said.