How to Track a Shark

Turtle Island interviewed our Ecuador Representative & Shark Scientist Dr. Alex Hearn to learn more about the art of tagging and tracking sharks in order to learn more about how to track a shark, their migrations, birthing habitats and behavior. Turtle Island uses data collected from shark tagging expeditions to put in place smart, science-based conservation measures. For instance, in the Eastern Tropical Pacific we are using data collected from shark tagging expeditions to create a marine protected corridor that aims to protect sharks during their natural migrations.

Q: What type of technology is used to follow sharks?

A: We use three types of technology to tag and track sharks – visual tag, ultrasonic tags and satellite tags.

Visual tags, such as a spaghetti tag or a numbered disc, are cheap and can be quick (although they often involve catching the shark). With this type of tag, researchers need to recapture the shark, or at least get close enough to read the number on the tag. Thus this method is often used in fisheries where lots of shark are caught and can easily be monitored at docks or by onboard observers. This method is good for figuring out growth rates (measuring when a shark was tagged, and then measuring it again when it is recaptured), and also tracking shark movements.

Ultrasonic tags send out a signal that can be detected by a fixed underwater receiver or a mobile hydrophone on a boat. This method is good for tracking and studying fine scale behavior (but is very time consuming). It is also great for looking at presence or absence, residency, and movements between receiver locations.

Tags can be placed externally by free diving and attaching with a dart (this is quick and has less impact on shark, but the tags can detach after short periods of time) or internally in the peritoneal cavity (this is more time consuming and involves catching the shark, immobilizing it, and performing surgery. This will than last for several years).

Satellite tags make use of the Argos satellite system. These tags cannot transmit while underwater. There are two kinds. The SPOT tags send a signal when the shark is at the surface (so they either attach to the sharks fin, or float behind as a towed tag). The other stores information, estimates position using light curves compared with GMT and local time and then detaches after several months, floats to surface and sends info. Both kinds can also store depth, temp etc.

2. How do you identify locations to tag sharks?

We look for a place where we can access the sharks easily. This is not always in the place we want to study. For example, I’m really interested in how whale sharks use the Equatorial Front. But there is no way I can get out there as it is far out in the open ocean. So instead I will tag sharks at Darwin Island (an Island in the Galapagos) where we know we can reliably find them, and from there, we can track them when they go to the Equatorial Front. Choosing the location is a cost-benefit analysis that depends on the scientific question we are trying to answer, so if we are evaluating a particular geographic location (such as the Galapagos Marine Reserve) then makes sense to go there.

3. What does tagging a shark look like, step by step?

For quick and easy step by step infographic that explains the scientific process of tagging a shark click here: http://migramar.org/hi/our-work/research-methods/. 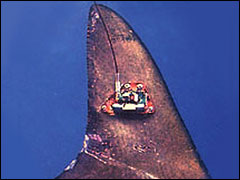 4. How do you feel when you find a shark, and then successfully tag it?

It always feels great to know you’ve tagged a shark. It is an adrenaline rush because it is a big effort to get out to sea, go to a remote location, and then try and tag it. Afterwards I am always thinking about the data and wondering if the tag will stay on the shark, and wondering where the shark will go.

5. What is the most number of sharks you’ve tagged in a day? And what type of sharks have you tagged?

Join us on an expedition to Cocos Island, Costa Rica to help us tag, study and protect sharks and sea turtles. Click here to learn more.