While the data is still trickling in, we know the recent hurricanes (Harvey, Irma, Jose, Maria) impacted sea turtles in numerous ways. While thankfully the primary nesting season in the Southeast and Gulf of Mexico was nearing its end when the hurricanes hit, thus limiting the impact on this year’s sea turtle reproductive effort, nonetheless, tens of thousands of eggs were still incubating and had not hatched when the hurricanes struck. Leatherbacks and green turtles (that nest later than Kemp’s ridleys and loggerheads) are likely to have lost the most nests. One of the most dramatic impacts including a juvenile green turtle rescued approximately 50 miles inland from the Gulf of Mexico.

Sea turtles were impacted in numerous ways including:

– As much as 20-50% of nests from 2017 season had not yet hatched and may have been lost through exposure, beach erosion and drowning in US mainland, and possibly higher numbers in the Caribbean.

Mortality of adults and subadults

– Many nesting dunes were pummeled, flattened and washed away

– Deposited trees and other debris may prevent hatchlings moving to ocean

– Destruction and interruption of floating Sargasso weed lines/mats which is critical habitat for hatchling and juvenile turtles. Large quantities of Sargasso algae washed ashore with 100s of entangled small turtles

– Hundreds of turtles were transported out of sea turtle rehabilitation centers in the path of the storm. The direct impact on turtles that had to be moved is unknown.

– Many sea turtles that were not moved from sea turtle rehabilitation centers in the path of the storm were released prematurely back into the ocean.

Make a tax-deductible donation to help us protect sea turtle nesting beaches in the Gulf of Mexico and beyond. 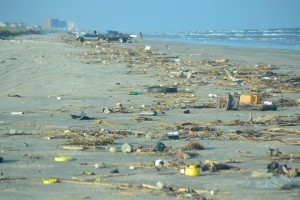 We are in the process of interviewing sea turtle conservation programs in the impacted areas and gathering news reports. Below are some reports we have found:

A storm-ravaged sea turtle nesting season came to an official end Oct. 31, with about half of the nests laid on Southwest Florida beaches washed out

In the wake of Hurricane Irma, staff and volunteers at the Brevard Zoo in Melbourne, Florida are caring for over 1,500 displaced hatchling and washback green and loggerhead sea turtles. When the turtles arrived at the zoo’s Sea Turtle Healing Center, each hatchling and washback was documented. The Florida Fish and Wildlife Conservation Commission then transported the turtles to safe waters.

The group of volunteers at Fort Pierce rescued between 50 and 60 baby turtles by 10 a.m., according to WPTV, and found about 20 that didn’t survive the storm.

WhiteCloud estimates there were approximately 900 turtle nests throughout Broward County that were still active when the storm came in. The hatching season for turtles throughout most of Florida runs from March through October.

Further north, in Sarasota on Florida’s West Coast, a team from the Mote Marine Laboratory and Aquarium is just starting to assess potential damage to the more than 4,000 turtle nests that were active before Irma arrived.

“They can withstand some water but it’s the standing water that is not too good,” said spokeswoman Shelby Isaacson. “Thankfully for our area in particular, the storm went by really quickly so we’re hoping that means we won’t have a lot of standing water.”

The storm’s threat caused one turtle hospital in Florida to move all of their patients.

Of the 4,500 loggerhead, green and leatherback turtle nests Ecological Associates has documented on its 11-mile monitoring area on Hutchinson Island throughout the 2017 season, about 1,000 of them remain on the beach, Scarola said.

As of Sept. 17, AMITW reported 319 hatched nests and 37 nests remaining to hatch on the island. Fox said 22 nests were lost during the storm.

As Tropical Storm Irma ripped through the area, pushing tides up the beach and wiping out dunes, 54 nests were lost to the ocean.

“The assumption is that we have lost all the nests to the storm and tides,” said Amber Kuehn, manager of the Hilton Head Island Sea Turtle Protection Project. “Even if some eggs are still on the beach, they’ve been inundated with water… . And when they’re inundated with water, they drown.”

This year, counting the nests that were lost, 326 were laid.

Tidal inundation, as well as rainwater inundation, made for a tough season this year, Kuehn said.

Immediately after the storm, hundreds of hatchlings were found on area beaches. The Florida Fish and Wildlife Conservation Commission says hatchlings making their way to the water should be left alone, and those heading the wrong way may be picked up and place at the water’s edge.

The sea turtles are in the middle of nesting season, and most of our beaches that have the nests were probably swallowed up by that 10 foot-plus swells,” she said.

Many of the eggs from threatened and endangered species, such as leatherback turtles and the more common loggerhead turtles, were dug up as the high surf pounded the beaches starting Saturday.

More than 5 million pounds of pollutants from refineries and petrochemical plants were released due to the hurricane.