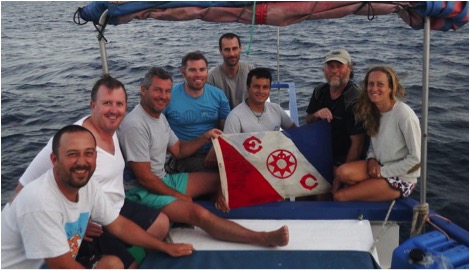 Galapagos Islands are the only known location where large, female whale sharks that appear to be pregnant can be seen gathering from June-November each year. To date little is known about whale shark birthing habits or location, or their pups.

Puerto Ayora, Ecuador (October 7, 2015) With the permission of the Galapagos National Park Directorate, experts from around the globe sailed to Darwin Island in the far northern region of the Galapagos Marine Reserve in Ecuador. The objective was to document the movements and behaviors of the world’s largest fish, the whale shark (Rhincodon typus), in order to better understand its natural history and improve international conservation measures.

Although whale sharks are found in tropical and temperate waters around the globe, little is known about their ecology. Most studies have occurred at locations primarily visited briefly by juvenile males perhaps to feed (e.g., Western Australia, Mozambique, the Gulf of Mexico, Republic of Philippines). Few adult whale sharks have been seen at these same locations. The whereabouts, movements, and behaviors of adult whale sharks has long remained a mystery, and scientists have rarely had opportunities to get close to them until now in the Galapagos.

Jonathan Green, project leader and member of Fundacion Megafauna Marina Ecuador, has been observing whale sharks at Darwin Island for over 20 years. “It became clear to me that we are dealing here with a very specific portion of the population. Almost all whale sharks we observe are large females, with distended abdomens, suggestive of pregnancy.”

In 2011, together with the Galapagos National Park Directorate and other partners, Green created the Galapagos Whale Shark Project. The project began an ambitious study to attach satellite tags to sharks at Darwin Island to track their movements. The initial results were surprising. The team found that rather than a resident group of whale sharks, there was a steady stream of whale sharks moving past Darwin throughout the season.

“Although there may be only three or four whale sharks present at any given time, the turnover rate is around two days, so over a season several hundred sharks may use the site.”

Dr. Alex Hearn of Turtle Island Restoration Network and Universidad San Francisco de Quito has worked on the project since its inception.

“We found that the sharks were moving over a thousand kilometers offshore along the equatorial front, then back again past Darwin to the highly-productive waters off the shelf break of southern Ecuador and northern Peru. Could these movements be related to pupping grounds?”

Only a handful of neonate (newborn) whale sharks have ever been reported, some from the bellies of oceanic mako and blue sharks, others from deep-water fisheries. Almost nothing is known about the early life stages of whale sharks.

“Thanks to support from the Galapagos Conservation Trust and a private trust, this year we were able to bring together whale shark experts from all over the globe, a unique collaboration for a unique location,” added Green.

Dr. Brent Stewart of the Hubbs-SeaWorld Research Institute was one of the pioneers of whale shark tracking and has been studying whale sharks in waters around Kenya, the Maldives, Western Australia, the Philippines, Indonesia, and the Gulf of California. During the research cruise he attached long-term satellite tags to four female whale sharks. These tags will now provide information on movements for up to eight months.

“We hope to document where these adult females travel and spend their time, how they interact with local and regional marine ecosystems, and perhaps too where they give birth and mate,” he remarked. The scientists also attached a further six short-term satellite tags and a custom camera tag.

Dr. Simon Pierce and Dr. Chris Rohner of the Marine Megafauna Foundation have been working with whale sharks internationally and are part of a global effort to maintain a photo database of individual whale sharks.

“Whale sharks can be identified by the pattern of spots behind their gills, the equivalent of a human fingerprint. By submitting photos to www.whaleshark.org, an online collaboration system for whale shark researchers, we are documenting global connectivity between feeding sites along with the residency of sharks at particular favored areas,” explained Dr. Pierce. “Citizen science plays a key role in this effort, and any divers that have visited Galapagos can also submit their encounters to the global database,” added Rohner.

By taking small skin samples from sharks, Galapagos-born biologist Leandro Vaca of Galapagos Science Center, Universidad San Francisco de Quito and Ph.D. candidate Clare Prebble from the Marine Megafauna Foundation hope to determine where the sharks are spending their time and what they eat.

“The tissue samples can be analyzed for their stable isotope levels and fatty acid content, which can then be related back to plankton samples we took during the cruise at Darwin,” explained Vaca. “Unlike at other places where whale sharks are regularly seen, the sharks at Darwin have never been observed feeding. Using tiny pieces of skin, we can compare the sharks’ tissue composition with samples from Peru and other locations to reconstruct their movements between feeding and possible breeding or pupping areas,” added Prebble.

Dr. Alistair Dove of Georgia Aquarium in Atlanta is leading the effort to take blood from the whale sharks in order to analyze their hormonal levels and carry out basic health assessments. “We have developed techniques to take blood under aquarium conditions, but applying them in the field presents huge challenges. After this trip however, I am confident that it can be done.” Dove was struck by the marine life at Darwin. “This is such a special location, not just because of the whale sharks. We encountered walls of hundreds of scalloped hammerhead sharks just off the reef on every dive, along with yellowfin tuna, bottlenose dolphins, silky and Galapagos sharks and green turtles. The Galapagos National Park Service have a jewel here, and we feel honored to be able to contribute to their work conserving the rich biodiversity of these islands.”

Turtle Island Restoration Network works to mobilize people and communities around the world to protect marine wildlife, the oceans and the inland waterways that sustain them. www.SeaTurtles.Org

Hubbs-SeaWorld Research Institute’s mission is “To return to the sea some measure of the benefits derived from it” by conducting research on marine fauna to support conservation and maintenance of vital populations on in healthy oceans.

Marine Megafauna Foundation is focused on saving ocean giants, such as whale sharks and manta rays, through pioneering research, the development of enduring conservation solutions, and inspiring the next generation of ocean guardians. www.marinemegafauna.org

Georgia Aquarium in Atlanta is a 501(c)(3) non-profit organization that contains more than 10 million gallons of water and has the largest collection of aquatic animals. Georgia Aquarium’s mission is to be a scientific institution that entertains and educates, features exhibits and programs of the highest standards, and offers engaging and exciting guest experiences that promote the conservation of aquatic biodiversity throughout the world. Georgia Aquarium is an accredited member of the Association of Zoos and Aquariums and the Alliance of Marine Mammal Parks and Aquariums. For additional information, visit www.georgiaaquarium.org.