Jaws? Not at Stinson Beach

This week a critically injured juvenile fin whale washed ashore at Stinson Beach followed closely by a Great White Shark.  While a team responded to the whale, lifeguards observed a 10-15 foot shark in the shallows beyond the beached whale.  The authorities closed the beach to surfing and swimming until deemed safe. A post mortem examination by a veterinarian from the Marin Marine Mammal Center discovered the 42 foot whale had internal bleeding and a damaged sternum that could be consistent with a serious impact.
While it is common to have these large whales feeding in our Sanctuary this time of year, unfortunately it is also not uncommon that ships strike and kill these endangered mammals. In 2010, NOAA reports five whales (two blue, one humpback, and two fin whales) were killed by confirmed ship strikes in the San Francisco area and elsewhere along the north-central California coast.  Concern by conservationists resulted in government agencies including NOAA and the Coast Guard to establish new guidelines to reroute shipping traffic in the Sanctuaries order to reduce ship strikes on whales.  The National Marine Sanctuaries are also employing a citizen science whale spotting data collection to help report whales in or near the shipping lanes. Unlike the town of Amity in Jaws, there is no Quint or well meaning Chief Brody to establish a shark hunt, or as in Oregon, the dead whale will not be exploded
into a rain of blubber. http://www.youtube.com/watch?v=79tl2H3QzT0&feature=share&list=PL20AF0A7EE84DB46F
The fin whale has been buried at a remote area of the beach to decay naturally.
Also unlike the French Island of Reunion, where a shark cull has been initiated following two shark attacks, our National Park Service and Life Guards are taking a pragmatic approach for the public safety and the well being of the potentially endangered Great White Shark. 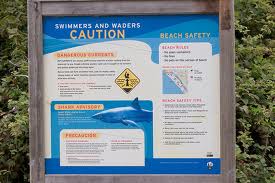 On our beaches, we have an excellent system of signage, observation and reporting to ensure a coexistence with our fellow sea creatures.  The potential death from a ship strike suggests we still have work to attain this coexistence. It is unfortunate to lose this whale, but accolades go to our local officials for acting in the best interests of the public and the sharks.