Team Turtle took a deep dive into scientific studies to determine which areas of the Gulf of Mexico are vital for the survival of the Kemp’s ridley,  and then translated those areas to the legal confines of critical habitat under the Endangered Species Act.

In the wake of the Trump administration scaling back national monuments and gutting protections for America’s wildlife, Turtle Island Restoration Network (TIRN), an ocean and coastal watersheds conservation group, is petitioning the U.S. National Marine Fisheries (NMFS) and U.S. Fish and Wildlife Service (FWS), Secretary of the Interior Ryan Zinke to designate critical habitat for the Kemp’s ridley, the world’s smallest and most endangered sea turtle, in the Gulf of Mexico.

“It takes decades of effort to stop endangered species like the Kemp’s ridley from becoming extinct and put them on the road to recovery,” said Joanie Steinhaus, TIRN’s Gulf of Mexico Program Director. “This Petition is forward-looking and contributes to the ongoing scientific effort to recovery this iconic species that will long outlast the current headlines.

The Kemp’s ridley is listed as federally endangered under the Endangered Species Act. It’s population had suffered a devastating decline after World War II due to near-total exploitation of eggs, slaughter of adults for meat and bycatch during commercial fishing. 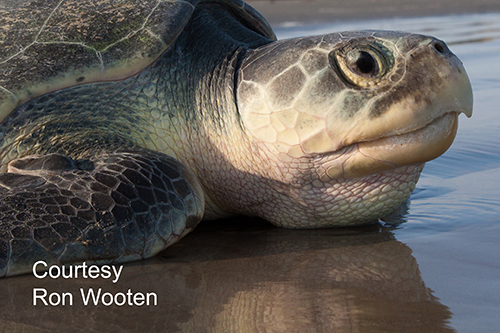 Since then, the turtle population began to rebound in the 1970’s principally due to bi-national recovery efforts by Mexico and the United States protecting its principal nesting beaches in Mexico and addressing bycatch in the commercial shrimp fishing nets., But the Kemp’s ridley’s path to recovery has stalled since 2010, the year of the BP Deepwater Horizon Oil spill. In addition to existing threats from fishing activities and oil spills, the Kemp’s ridley also has to contend with habitat loss, the frequency and intensity of hurricanes and our own actions to shield ourselves from climate change, e.g. the “Ike Dike.” These sea turtles also face death from increased debris in the ocean like plastic bags and microplastics from cosmetics, clothing and industrial processes.

“We work with volunteers and partners every year to monitor nesting beaches and protect the nests of sea turtles like the Kemp’s ridley,” said Steinhaus. “The Kemp’s ridley is the world’s most endangered, and most vulnerable sea turtle species. We need the designation of critical habitat that will protect their nesting beaches for them now before we lose these incredible creatures forever.”

The Petition requests designation of critical habitat for nesting beaches along the Texas Gulf Coast where turtle are currently nesting, and in other Gulf states to protect beaches where the sea turtles will likely nest as warming temperatures drive them northward. The Petition also requests critical habitat designation for near-shore Gulf coastal waters where the Kemp’s ridley migrate and forage.

The Petition was prepared by Student Attorneys (also known as “Team Turtle”) at the Getches-Green Natural Resources and Environmental Law Clinic at the University of Colorado Boulder. Professor Karin Sheldon supervised and guided the Student Attorneys in their research and preparation of the Petition and most recent scientific research supporting its request.

Team Turtle took a deep dive into scientific studies to determine which areas of the Gulf of Mexico are vital for the survival of the Kemp’s ridley,  and then translated those areas to the legal confines of critical habitat under the Endangered Species Act.

“The opportunity to work alongside Turtle Island Restoration Network to produce the Petition for Critical Habitat for the Kemp’s ridley was a fantastic experience for our group to contribute in a meaningful way to the protection of the world’s most endangered sea turtle,” said Chris Mochulsky, a student attorney with Team Turtle. “We are proud to be a part of the effort to protect the habitat of the Kemp’s ridley, and we are excited to watch the developments that stem from the petition.”