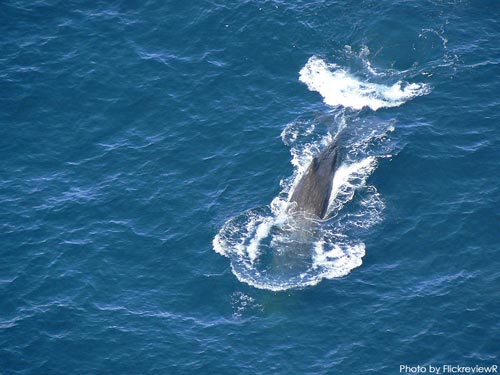 Protection sought against gillnets off California

A Marin-based group plans legal action against the federal government to protect sperm whales, which swim in deep waters off the county’s shores.

“These endangered sperm whales should be protected from these gillnets,” said Joanna Nasar, spokeswoman for the Turtle Island Restoration Network. “It’s time for the fisheries service to stop these nets from being used.”

Last week the National Marine Fisheries Service let expire a year-long temporary regulation requiring a certified observer to be on board all vessels fishing in deeper waters, where sperm whales tend to live. The regulation also required the closure of the fishery if one sperm whale was seriously injured or killed.

Fisheries service officials said the rule was abandoned because the number of sperm whales is believed higher than previously thought. That said, the agency is studying the issue and could issue another regulation, said spokesman Jim Milbury.

“There still will be 30 percent of trips that have the observers and the whales are protected by the Marine Mammal Protection Act and the Endangered Species Act,” Milbury noted.

Sperm whales are found year-round in California waters, but they reach peak abundance from April through mid-June and from the end of August through mid-November, according to the National Oceanic and Atmospheric Administration.

Drift gillnet fishing for swordfish involves setting out mile-long nets at dusk that drift freely where fish, sharks, turtles, and marine mammals feed or migrate during the night. On average this California fishery — which operates primarily between Aug. 15 and Jan. 31 — catches more than 100 protected whales, dolphins, seals and sea lions each year, in addition to thousands of sharks and other fish according to NOAA.

“This fishery has already claimed the lives of dozens of whales,” said Miyoko Sakashita, oceans director at the Center for Biological Diversity, which plans to join the suit along with Oceana, another environmental group. “As this fishery ramps up, this is the worst possible time for the government to strip away whale protections.”

The sperm whales are large “with square head, undersized lower jaw, and wrinkled skin (with) body color varies from dark gray to light brown,” according to the Marin County Open Space and Park website. It dives for up to 35 minutes and feasts on squid and octopi. It also dives to avoid boats, while swimming in groups of 20 animals and moves north in summer and south in winter. That’s when it can be spotted off Marin’s coast and near the Farallon Islands, scientists say. The species can grow up to 52 feet in length and weigh 45 tons.