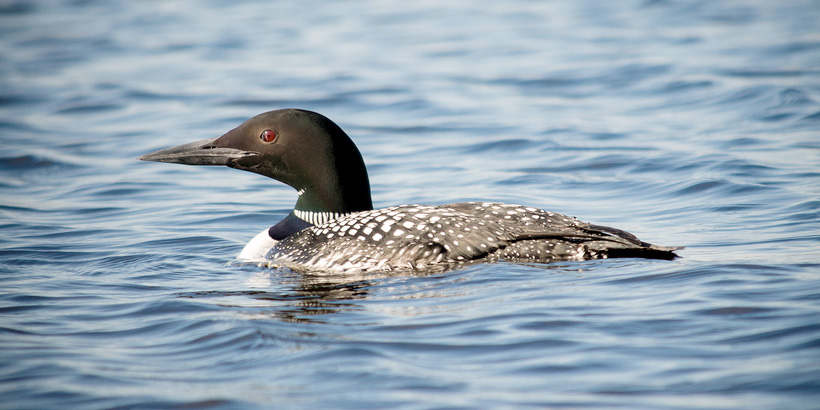 Mercury is Not Just in Fish and Humans, 10-year Study Links Air Pollutant to Loon Decline

The report summarizes field research conducted from 1998 to 2007 by the Biodiversity Research Institute, headquartered in Gorham, Maine, and the Wildlife Conservation Society. The work, sponsored by the New York State Energy Research and Development Authority, gathered baseline data to monitor mercury and support environmental regulation.

Loons are fish-eating, diving aquatic birds about the size of small geese. The study found 75 percent of loons sampled were at a moderate to high risk from mercury in their blood, said Zoe Smith, director of the Wildlife Conservation Society’s Adirondack Program, based in Saranac Lake.

Loons with high mercury levels lack the energy to incubate their eggs properly and take care of their young. As a result, a loon with a high level of mercury produces 40 percent fewer young, the report said.

The study showed mercury contamination in the aquatic food chain increased significantly from plankton and crayfish to higher-level predators including loons. Loons in the southwestern Adirondacks were more likely to have elevated mercury levels than those elsewhere in the Park.

Loons, which live 20 to 30 years, typically return from winter migration to nest on the same Adirondack lake from year to year. If that lake has a high mercury level, the loons also will have high levels because mercury stays in the body and builds up over time. Thus, loons are considered an excellent indicator species for the health of an aquatic ecosystem.

Besides mercury, loons also are harmed by lead poisoning from fishing sinkers and entanglement in fishing line, said Nina Schoch, who coordinates Adirondack loon projects for the Biodiversity Research Institute. People with motorboats and personal watercraft also harm the birds by causing crashing waves that damage lakeside nests, she said.

“Mercury,” Schoch said, “is definitely affecting the portion of the population with high levels.”