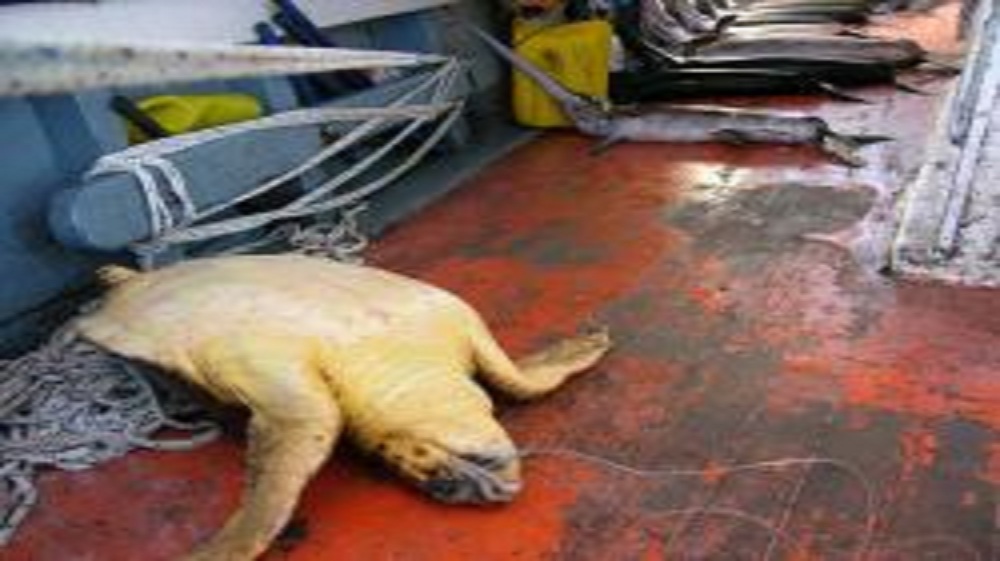 Conservation groups based in Hawai’i and across the U. S. are opposing the increased capture of sea turtles, whales, seabirds and vulnerable tuna and shark species in a planned expansion of the Hawai‘i based longline fishery for swordfish by National Marine Fisheries Service (NMFS). The deadline for public comment is August 3, 2009. The proposal came from the Western Pacific Fisheries Management Council (WESPAC) which has been slammed by the U. S. government in a recent investigation for secrecy and inability to produce reports, among other things. See the Government Accountability Office report.

The expanded fishery would allow the catch of three times more loggerhead sea turtles and remove all limits on the number of longlines set in the ocean to catch swordfish – to more than 4 million deadly hooks every year. The expanded fishery would also result in continued injury and death of gravely endangered Pacific leatherbacks. More false killer whales, humpback whales, dolphins, sea birds and vulnerable bigeye and yellow fin tuna as well as blue sharks would be accidentally caught and discarded overboard as by-catch. The industrial swordfish fishery has already taken a toll on Hawai’i’s recreational and subsistence fisheries, according to local fishers. The swordfish caught in the fishery is shipped directly to the U. S. mainland or Japan, not eaten in Hawai’i.

People can submit comments from the Sea Turtle Restoration Project website or by going to http://www.regulations.gov/ and search for Rule Number 0648-AW49. Hawai’i residents may also sign a petition opposing the expanded fishery at Snorkel Bob locations around the Islands http://snorkelbob.com/

NMFS is proposing to remove all limits on how much fishing the swordfish fleet can do, and to expand the allowable capture of Pacific loggerhead sea turtles from 17 per year to 46 per year. Only about 1,500 Pacific loggerheads remain to nest on beaches in Japan. Hooking of 16 leatherbacks would be allowed each year. Pacific leatherback populations have fallen by 90 percent in the past decade, and less than 5,000 Western Pacific females remain.

Scientific analyses have revealed that, without greater protection, both the loggerhead and leatherback sea turtles could be functionally extinct in the Pacific within a matter of decades. The Hawai’i longline swordfish fishery regularly captures, injures, and kills loggerhead and leatherback sea turtles, both of which are protected under the federal Endangered Species Act. Current limits on the fishery designed to protect sea turtles, themselves inadequate, were put in place in 2004 following litigation by conservation groups.