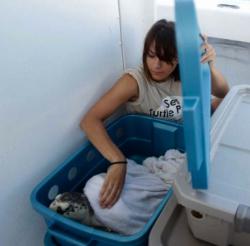 Working collaboratively with other Texas field biologists, the Sea Turtle Restoration Project’s intern, Heather Medina, participated in the release of a critically endangered Kemp’s ridley sea turtle offshore of Texas. The young sea turtle was near-death with it was initially discovered, and in a unique public educational outreach project, it had a live video camera monitoring it for months while it recovered from injuries. Our Gulf of Mexico office sponsored a contest among students to name the sea turtle – the winning name was “Milagro”, which means “Miracle” in Spanish.

Read the story as it was published in the Houston Chronicle Newspaper below.

ABOARD THE FLYING FISH TOO – Milagro didn’t look back after he was dropped from this Texas A&M boat Wednesday 24 miles out in the Gulf of Mexico. The little Kemp’s ridley sea turtle darted away, his three flippers propelling him at top speed.

Milagro became a minor celebrity after surviving life-threatening injuries and being placed in a tank at Texas A&M Galveston’s Sea Life Facility while he waited for the proper time for his release. Thousands of viewers watched on a webcam as Milagro swam and dined on crab and shrimp in a tank equipped with a turtle house made of plastic pipes.

Visitors traveled from Dallas, Austin and San Antonio to the Texas A&M campus to see the turtle, discovered last July 24 by two fishermen at Surfside.Milagro’s carapace was cracked, his lungs were damaged, his right front flipper was gone, the edge of his shell was missing a chunk, and he had pneumonia.

He was nursed back to health at the National Oceanic and Atmospheric Administration‘s Sea Turtle Facility in Galveston before being transferred to Texas A&M.

“Everyone on campus got so attached and so invested in this little turtle,” said Dr. Kimberly Reich, Marine Research Facility manager.

Milagro got his name in April in a contest run by the Sea Turtle Restoration Project. A science class at Sam Houston Middle School in Garland was going to suggest the name Miracle. The 90 percent Hispanic class opted instead for Milagro, the same name in Spanish, after learning that the endangered Kemp’s ridleys’ primary nesting ground is in Mexico, Reich said.

Milagro bided his time while researchers waited for the water to warm to the right temperature and for the end of the shrimp season so he wouldn’t get caught in a net, she said.

When the time came, Reich and Heather Medina, a 23-year-old intern with the Sea Turtle Restoration Project on loan to Reich, took Milagro and three other turtles on board the Flying Fish Too, a 59-foot cargo vessel.

Each turtle was placed on a towel in a plastic bin with air holes. Like Milagro, the other Kemp’s ridleys had been rehabilitated after suffering grievous injuries. Two, like Milagro, were missing flippers. The third, and smallest, was found tangled in sargassum seaweed.

Michael Hoffman, a biologist at Galveston’s Moody Gardens, said the turtle found in the sargassum had been held at Moody Gardens since February. The crew there nicknamed him Lamar.

Reich said the turtles were being taken far into the Gulf because at their age they normally lived in clumps of seaweed floating at sea. She said they are not accustomed to feeding near shore and might not be able to find their way to sea if released on the beach.

The 24-mile point was chosen because it was the closest reasonable point of release that was not in the shipping lanes, she said.

After a two-hour voyage through choppy seas, the Flying Fish Too stopped dead in the water. Hoffman leaned over the stern and dropped Lamar into the sea, and Medina and Reich each released one of the other turtles.

“Four more critically endangered turtles released into the wild,” Reich said. “I’ll miss seeing him, but I’m not in the least bit sad.”