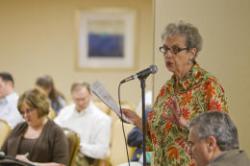 The Houston Chronicle featured STRP’s newly developed plan for protecting sea turtles from oil and gas development in its coverage of a public hearing about environmental review of the 2012 – 2017 leasing plan. See the article here or read below. Read about the plan and download comments here.

At the hearing Tuesday, Carole Allen offered a three-part plan to protect marine creatures in the Gulf.

A public hearing Tuesday on environmental considerations for drilling in the western and central Gulf of Mexico turned into a forum to debate domestic exploration policy.

Andy Radford, senior policy adviser for the American Petroleum Institute, told a federal panel meeting in Houston that oil and natural gas producers are “extremely disappointed” with the administration’s refusal to include the eastern Gulf and southern and mid-Atlantic regions in upcoming environmental-impact studies.

Without such studies, the government cannot put tracts in those restricted waters out for bid during the next five-year lease period, which begins in 2012. Those areas have been off limits for years, even as exploration and production boomed in the central and western Gulf.

President Barack Obama said early last year that the administration would at least consider opening the areas up for exploration, but the Gulf of Mexico oil spill that started in April forced re-evaluation of all offshore drilling plans. In December, Interior Secretary Ken Salazar announced that expansion of drilling would be on hold as regulators continue to strengthen safety requirements.

Radford and others urged the government at least to conduct the environmental impact studies, which would not commit it to offering leases in new areas. They warned that delay carries risk and said U.S. energy demand will continue to grow, with or without more domestic offshore production. Among their arguments:

Technological advances of recent years could pay off with safe, new discoveries in the restricted areas.

Increased energy costs attributed to supply shortages could threaten the economy, while potential royalties from new drilling could give a boost to local, state and federal governments.

The potential hazard from importing oil aboardsupertankers rivals the environmental threat from offshore exploration and production accidents.
The hearings in Houston and otherselsewhere this week are designed to solicit public input on what environmental factors should be considered in the impact studies before the next round of leases.

Carole Allen, Gulf director of the Sea Turtle Restoration Project of Texas and California, recommended a three-part strategy to protect the marine life:
1) Evaluate all new and existing rigs in light of lessons learned during last year’s spill and its cleanup.

2) Deny leases in sea turtle breeding grounds, foraging areas and migratory routes, and phase out those currently operating in such sensitive areas.

3) Require oil and natural gas companies to increase monitoring for the turtles and fund further study of how marine life can be helped.

Marc Lawrence, a manager with Global Geophysical Services in Missouri City, asked the panel to rely on sound environmental science that would allow companies to conduct more seismic testing.

He compared it to ultrasounds on humans and said it could pinpoint and clarify “problems out there with the earth” and perhaps even prevent future rig disasters.

“We believe that we are part of the solution,” he said.
And, he added, “We love those turtles as just as much as Carole does.”