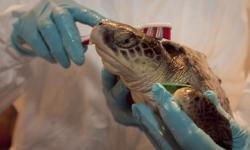 In response to STRP’s calls to end BP’s burning of turtles and to prosecute the oil corporation for its actions, The Guardian newspaper in the United Kingdom got the Obama administration to confirm that this turtle crime was committed. Gulf Director Carole Allen told the reporter: “It is criminal and cruel and they need to be held accountable.” The story was published internationally. See the link or read the story below. Watch for updates from the Gulf on this and other actions to protect sea turtles and marine life from the BP Oil Disaster.

Friday 25 June 2010 – A Kemp’s Ridley turtle rescued from the BP oil spill is cleaned up at the Audubon Nature Institute in New Orleans. (Photograph: Bevil Knapp/EPA)

Endangered sea turtles and other marine creatures are being corralled into 500 square-mile “burn fields” and burnt alive in operations intended to contain oil from BP’s ruptured well in the Gulf of Mexico, the Obama administration confirmed today.

The killing of the turtles – which once teetered on the brink of extinction – has outraged environmentalists and could put BP into even deeper legal jeopardy.
Environmental organisations are demanding that the oil company stop blocking rescue of the turtles, and are pressing the US administration to halt the burning and look at prosecuting BP and its contractors for killing endangered species during the cleanup operation. Harming or killing a sea turtle carries fines of up to $50,000 (£33,000).

“It is criminal and cruel and they need to be held accountable,” said Carole Allen, Gulf office director of the Sea Turtle Restoration Project. “There should not be another lighting of a fire of any kind till people have gone in there and looked for turtles.”

The Obama administration, confirming the kills, said BP was under orders to avoid the turtles. “My understanding is that protocols include looking for wildlife prior to igniting of oil,” a spokeswoman for the National Oceanic and Atmospheric Administration (NOAA) said. “We take these things very seriously.”

The agency this week posted a single turtle spotter on the burn vessels, but government scientists are pressing for more wildlife experts to try to rescue the animals before the oil is lit – or at the very least to give them access to the burn fields.

“One can’t just ride through an area where they are burning and expect to be safe while looking for turtles. We don’t expect that, but we would like to access those areas where we suspect there may be turtles,” said Blair Witherington, a sea turtle research scientist at Florida’s Fish and Wildlife Research Institute.

More than 425 turtles are known to have died in the spill zone since 30 April, NOAA said.