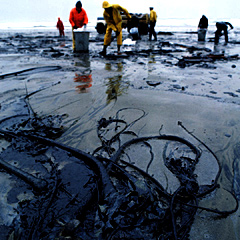 The recovery of endangered Kemp’s ridley sea turtles in the Gulf of Mexico faces a dramatic set-back as oil from the Deepwater Horizon spill impacts coastal areas during their peak migration to nesting beaches. Scientists and conservation workers that have invested decades of work towards the sea turtles’ recovery are concerned about the growing impacts the oil slick and oiled beaches will have on these imperiled creatures.

“I have great concern for the environmental impact the spill will have on our fragile coast.” says Dr. Andre Landry, Jr. of Texas A&M University’s Sea Turtle and Fisheries Ecology Research Lab. “We are entering the prime time within the ridley nesting season in which adult females will be in nearshore waters nesting 3 to 4 times every 14 to 21 days.”

“This spill could not have come at a worse time for migrating and nesting Kemp’s ridleys,” says Carole Allen, Gulf Director of the Sea Turtle Restoration Project and founder of HEART (Help Endangered Animals Ridley Turtles).

There are five species of endangered and threatened sea turtles in the Gulf, but this area represents one of the Kemp’s ridley’s only foraging and migration routes to their last remaining nesting beaches in Texas and Mexico. At least 33 dead or dying Kemp’s ridleys have recently washed up on Texas beaches, but these casualties are more likely linked to shrimp trawl activities along the coast.

“My satellite tracking data for both juvenile and adult ridleys reveal a strong loyalty to the Texas coast and eastward to the mouth of the Mississippi River,” says Dr. Landry. Oil from the spill has landed on Lousiana shores already, and wildlife managers are scrambling to respond.

While berms and booms to deflect and catch oil are installed in the Brenton National Wildlife Refuge in Louisiana, the majority of coastal areas remain unprotected from the impending environmental devastation. As oil moves east toward Florida beaches, the oil spill could impact nesting of loggerhead and green sea turtles. The west coast of Florida is the largest nesting area for loggerheads, currently proposed to be reclassified as endangered from threatened in the Endangered Species Act because of continued threats and population declines. Green sea turtles are already listed as endangered and take up to 20 years to reach sexual maturity and begin nesting. But the current concern is focused on the endangered Kemp’s ridley, which is the smallest of the sea turtles and the only species to regularly nest during the day.

Ironically, the oils spill has occurred during the review of the NOAA Recovery Plan for the Kemp’s Ridley Sea Turtle, which states that at the current rate of recovery this endangered sea turtle may be reclassified down to threatened status by 2015. Carol Allen and Dr. Landry both have expressed concern that the current draft Plan fails to prioritize the importance of increased protections to assist the sea turtle recovery along Gulf and Texas migration, foraging, and nesting habitats. While the majority of these turtles nest in Mexico, the expansion of the population into Texas is already occurring.

The recent deaths of these endangered sea turtles on Texas shores and the impending devastation of the oil spill will likely highlight the importance of the Gulf waters to their continued survival.

“I have great concern for the environmental impact the spill will have on our fragile coast. I am particularly concerned about potential damage to sea turtle assemblages that forage and nest along the Louisiana coast, especially within Breton Sound, the Chandeleur Islands and eastward toward other barrier island beaches and their wetland fringes that extend to the Florida Panhandle and areas such as Cedar Key. This is particularly an acute concern for the endangered Kemp’s ridley sea turtle whose ongoing recovery is putting increasingly larger abundances of juveniles in our nearshore waters adjacent to tidal passes, beachfronts and within our bays in search of their preferred prey, the blue crab. At the same time, we have adult female ridleys using nearshore waters as a migratory corridor through which they are traveling to nest along the Texas and Mexico coasts. We are entering the prime time within the ridley nesting season (1 April through 15 July) in which adult females will be in nearshore waters nesting 3 to 4 times every 14 to 21 days. My satellite tracking data for both juvenile and adult ridleys reveal a strong loyalty to these habitats, especially along the Texas coast and eastward to the mouth of the Mississippi River. I regret that we have not had an opportunity (i.e., financial support) to characterize sea turtle use of waters east of the Delta but see no reason why they too are not important foraging grounds (especially) and, in the case of barrier island beaches, potential nesting areas.”