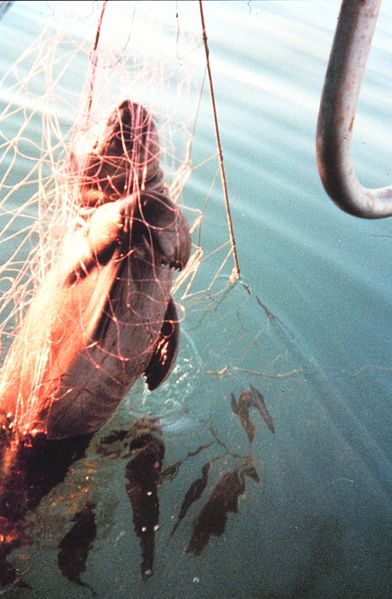 “Curtains of Death” May Return to Protected Area on the Pacific Coast Partners Oceana and the Sea Turtle Restoration Project warn that on November 3rd, the Pacific Fisheries Management Council will vote preliminarily on an application by the Vermont based Federation of Independent Seafood Harvesters to allow drift gillnets, also known as “curtains of death,” to be used again in a vast protected area along the California and Oregon coastline. Environmentalists from numerous organizations are opposing the exempted fishing permit because it threatens to injure and kill large numbers of sea turtles, marine mammals and non-target fish. “These drift gillnets have been called ‘curtains of death’,” said Robert Ovetz, PhD, Save the Leatherback Campaign Coordinator of the Sea Turtle Restoration Project, “because they kill everything that they catch.” The United Nations banned driftnets on the high seas in 1991 and the US has followed with recent closures to large areas in US waters including the time and area closures along the Pacific. Since 2001, areas north of Point Conception to an intersect with the Oregon coast has been closed to drift gillnet fishing from August 15th through November 15th in order to protect endangered leatherback and loggerhead sea turtles. This fishery which targets swordfish with drift gillnet gear, has had no recorded takes of leatherback sea turtles during the past three years. “For a fishery that wreaks such serious havoc on marine life including mammals, seabirds, and endangered sea turtles, the question ought not be about opening an area,”, said Jim Ayers, Vice President and Director of the Pacific for Oceana. “Instead we should be asking if and how we should continue this fishery. Somebody is asking the wrong question.” Since 2002 alone, 64 dolphins, whales, seals and sea lions have been killed by the drift gillnet fishery. Additionally, seabirds including Northern fulmars and Cassin’s auklet have been injured or killed. The proposed exemption would allow as many as two thirds of the remaining 36 vessels in the drift gillnet fishery into the closed areas. Earlier this year, 1,007 scientists from 97 countries and 281 non-governmental organizations from 62 countries delivered a letter to the United Nations urging it to implement a moratorium on harmful industrial fisheries including drift gillnets. The scientists wrote, “The Pacific leatherback sea turtle is at the top of the list of species being driven to the brink of extinction by increased efforts of global industrial fishing. The Pacific leatherback turtle’s nesting population has plummeted from 91,000 in 1980 to fewer than 5,000 in 2002. Recent studies warn that unless immediate and significant steps are taken, the world’s largest and most wide-ranging sea turtle will soon become extinct. Leatherbacks have swum the Earth’s oceans for over 100 million years and are part of a complex web of life that is rapidly unraveling. If we allow the leatherback to vanish from the oceans, we alter the balance that exists amongst predators and prey and risk the future of a host of other marine species. Leading sea turtle biologists and ocean experts recognize that pelagic longline and gillnet fishing pose the principal immediate threats to Pacific leatherback turtles at sea.” The Pacific Fishery Management Council will consider re-opening an area to the drift gillnet fishery Thursday in a discussion of Highly Migratory Species Management. The final vote on the application will take place at the March 2006 meeting of the Council.